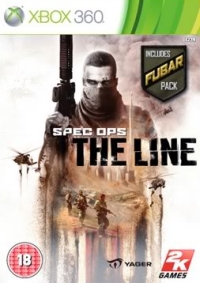 Spec Ops The Line is a Shooting game available on the 360. It can be played in Thirdperson Singleplayer modes.

Spec Ops The Line is a Shooting game. Shooting games present a world in which the character must shoot their way out of dangerous situations. They provide the player with an array of weapons tailored to specific tasks. This unavoidably involves a combination of fisticuffs and gun based fighting that dictates the violent nature of these experiences. Beneath this harsh exterior though is often an intricate tactile game - and this is usually what drives the player.

Spec Ops The Line can be played in a Thirdperson mode. Third Person games view the world from over the right shoulder of the character being controlled. This enables you to see the character you are controlling as well as their surrounds. Although not as immersive as first person, third person games enable more complex moves and interactions with the environment.

Spec Ops The Line can be played in a Singleplayer mode. Single Player Campaign games focus on one player's experience. Rather than collaborate with other players either locally or online, players progress alone. The campaign style of gameplay offers a connected series of challenges to play through. These chapters work together to tell a story through which players progress. Single player games are able to focus on one experience of a scenario, so that it is usually a richer, more visceral game.

Spec Ops: The Line may be another near-future military shooter, but its exotic setting and literary roots look promising.

It's been nine years since the last game in the Spec Ops series, and The Line will enter a shooter scene already crowded with near-future military titles like Tom Clancy's Ghost Recon and the all-conquering Modern Warfare.
read on...

A collection of our artisan reviewers are playing and reviewing Spec Ops The Line and will be writing their anecdotal account soon.