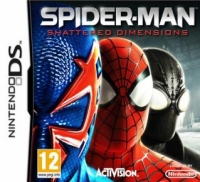 Spider-Man: Shattered Dimensions is a Fighting game available on the DS 360. It can be played in Singleplayer modes.

Spider-Man: Shattered Dimensions is a Fighting game. Fighting games revolve around the interaction of two or more characters in some form of physical combat. Players learn to control characters through either memorisation of button combinations to access more advance moves, or by their reactions and accurate timing.

Spider-Man: Shattered Dimensions can be played in a Singleplayer mode. Single Player Campaign games focus on one player's experience. Rather than collaborate with other players either locally or online, players progress alone. The campaign style of gameplay offers a connected series of challenges to play through. These chapters work together to tell a story through which players progress. Single player games are able to focus on one experience of a scenario, so that it is usually a richer, more visceral game.

Spider-man Shattered Dimension's novel story blends unusual aspects of Marvel's universe. But the real test is how good it feels to web-swing your way around New York city.

Spider-Man Shattered Dimensions promises to integrate the four different Spider-man worlds (Amazing, Noir, 2099, and Ultimate) from Marvel Comics, enabling players to jump between four different versions of their hero. What could be a little confusing is aided by a distinct visual signature for each Spider-man as well as voice work from the actors of each respective Marvel universe.
read on...

Spider-Man: Shattered Dimensions DS may be one Spidey short of the home console versions, but this tale of three universes acquits itself well in two dimensions with plenty of side-scrolling comic book thrills.

I must confess to a slightly morbid fascination with the versions of big budget home console games that come out for the more modest platforms. How do you cram a 3D, HD, Dolby Surround, whizz-bang gaming blockbuster on to, say, the Nintendo DS, without it being a creaky disaster?
read on...