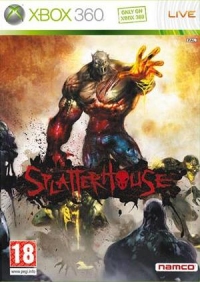 Splatterhouse is a Fighting game available on the 360. It can be played in Thirdperson Singleplayer modes.

Splatterhouse is a Fighting game. Fighting games revolve around the interaction of two or more characters in some form of physical combat. Players learn to control characters through either memorisation of button combinations to access more advance moves, or by their reactions and accurate timing.

Splatterhouse can be played in a Thirdperson mode. Third Person games view the world from over the right shoulder of the character being controlled. This enables you to see the character you are controlling as well as their surrounds. Although not as immersive as first person, third person games enable more complex moves and interactions with the environment.

Splatterhouse can be played in a Singleplayer mode. Single Player Campaign games focus on one player's experience. Rather than collaborate with other players either locally or online, players progress alone. The campaign style of gameplay offers a connected series of challenges to play through. These chapters work together to tell a story through which players progress. Single player games are able to focus on one experience of a scenario, so that it is usually a richer, more visceral game.

We have our reporters and community keeping an eye on Splatterhouse for you, and we'll keep you up to date with the latest developments as they happen.

Splatterhouse 360 is an enjoyable schlocky, button-masher beat-em-up that sticks close to its 1980s horror film roots, and is all the better for such lowbrow influences.

Back in 1988 the original Splatterhouse arcade game was a revelation to your then-teenage Story Gamer. While other side-scrolling fighters were influenced by martial arts movies, with a cast of ninjas and street punks, Splatterhouse looked elsewhere on the video shop shelves for influence, to the 1980s glut of low-budget horror films.
read on...