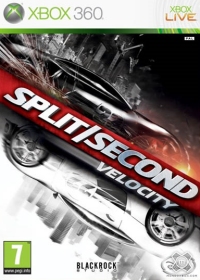 Split Second is a Racing game available on the 360 PS3. It can be played in Singleplayer Competitive Splitscreen modes.

Split Second is a Racing game. Racing games, although sometimes seen as a sporting sub category, are a well established video game genre in their own right.

Split Second can be played in a Singleplayer mode. Single Player Campaign games focus on one player's experience. Rather than collaborate with other players either locally or online, players progress alone. The campaign style of gameplay offers a connected series of challenges to play through. These chapters work together to tell a story through which players progress. Single player games are able to focus on one experience of a scenario, so that it is usually a richer, more visceral game.

Split Second can be played in a Competitive mode. Competitive Multiplayer games provide experiences where players compete against each other and the computer. Obviously lending itself to sports and team games, these competitive engagements have also dominated the shooting and fighting genres because of the direct combat and expertise involved in each. Although these games were originally played in a split screen style, more recently they are played online via services such as PlayStation Network, Xbox Live and the Nintendo Wireless Connection.

Split Second can be played in a Splitscreen mode. Split Screen Multiplayer games involve multiple players by providing a portion of the screen for each person. This enables two, three or four players to be involved in the game using just one console. Although popular for the PS2, Gamecube and Wii it is becoming less common in modern 360 and PS3 games which are less willing to sacrifice horsepower from the visuals to accomodate the extra players - they opt for an online multiplayer mode instead.

We have our reporters and community keeping an eye on Split Second for you, and we'll keep you up to date with the latest developments as they happen.

Split Second 360 tapped into my fear of earth shattering collapse. Its explosive-aggressive track got worryingly inside my head to begin with, but eventually became a bit to predictable to be enduringly scary.

I recently reviewed Blur so jumping into Split Second I was worried that playing another arcade racer so soon would feel like more of the same.
read on...

Split/Second 360 fuels adrenaline with overblown destruction. More impressive is its simplicity - layer upon layer of great game design create a game that is fun, well paced and incredibly addictive. Not only that but an experience a could fit in around family life.

There is a moment in many game's life where new ideas haven't yet outstripped complexity. Before the drive for sequels cram in ever more features and nuanced to the basic fresh idea is the perfect moment for me to enjoy it. I don't have the time or will to get the most out of more complex games so I like to look out for these first blush outings of new ideas.
read on... Split/Second PS3 made me question my real racing roots. But with such a focus on the driving, and heart warming visuals I can't argue with this arcade racer. It knows what it is and delivers in spades.

Split/Second comes from Blackrock Studios who were responsible for the much underrated off-road racer Pure.The finesse and attention to detail are evident here as they take us back to the halcyon days of pure explosive racing.
read on...

Split/Second looks like a serious racer, plays like an arcade game and really does have something for everyone. Even with Blur hot on its heals this is a technically impressive achievement.

The team behind Pure return with this, although they once said they will never make a Kart racer. Now don't get me wrong this isn't in the same vain as other Kart racers like Modnation or Mario Kart, this is something for the grownups that want a bit more of a rush - closer to Blur.
read on...