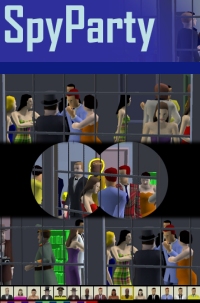 Spy Party is a Strategy game available on the 360. It can be played in Competitive modes.

Spy Party is a Strategy game. Strategy games provide experiences that require quick thinking, and forward planning from the gamer. They combine the unfolding tactics of classic games like chess, with more recent board games such as Risk. Usually focusing on a theatre of war context, players enjoy the tactical overview of the battle these games provide.

Spy Party can be played in a Competitive mode. Competitive Multiplayer games provide experiences where players compete against each other and the computer. Obviously lending itself to sports and team games, these competitive engagements have also dominated the shooting and fighting genres because of the direct combat and expertise involved in each. Although these games were originally played in a split screen style, more recently they are played online via services such as PlayStation Network, Xbox Live and the Nintendo Wireless Connection.

We have our reporters and community keeping an eye on Spy Party for you, and we'll keep you up to date with the latest developments as they happen.

Spy Party, even in the rudimentary form I experience at GameCity, looks set to redefine the interactions we expect from the games we play. A knife edge blend of mind games and double bluff, it's a very different spying experience.

Spy Party is currently in development by Chris Hecker (formerly part of the Spore development team). While many driving and shooting games use spy film-inspired plots to drive their narrative, Hecker believes that what we love about spy stories is the glamour: drinking, blending into parties and running rings around the enemy with cool-headed performance and deception. And he's turned that into a game.
read on... Bob and Fred play cat and mouse with Spy Party the up and coming indie game from Chris Hecker.

Confused? Listen to the Scripted Gamer Pilot episode to meet our reviewers and hear how it all started that fateful day.
read on...