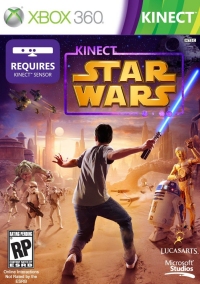 Star Wars Kinect is a Fighting game available on the 360. It can be played in Singleplayer Competitive modes.

Star Wars Kinect is a Fighting game. Fighting games revolve around the interaction of two or more characters in some form of physical combat. Players learn to control characters through either memorisation of button combinations to access more advance moves, or by their reactions and accurate timing.

Star Wars Kinect can be played in a Singleplayer mode. Single Player Campaign games focus on one player's experience. Rather than collaborate with other players either locally or online, players progress alone. The campaign style of gameplay offers a connected series of challenges to play through. These chapters work together to tell a story through which players progress. Single player games are able to focus on one experience of a scenario, so that it is usually a richer, more visceral game.

Star Wars Kinect can be played in a Competitive mode. Competitive Multiplayer games provide experiences where players compete against each other and the computer. Obviously lending itself to sports and team games, these competitive engagements have also dominated the shooting and fighting genres because of the direct combat and expertise involved in each. Although these games were originally played in a split screen style, more recently they are played online via services such as PlayStation Network, Xbox Live and the Nintendo Wireless Connection.

Star Wars Kinect promises to realise childhood Jedi fantasies while offering Microsoft and Lucas Arts the promise of a huge seller as it leverages both the 360's huge install base and the popularity of the brand.

Star Wars Kinect will offer exactly the kind make-believe play that every child who has ever seen Star Wars is familiar with, pantomiming Force powers, piloting star-fighters and most importantly lightsabers.
read on...

A collection of our artisan reviewers are playing and reviewing Star Wars Kinect and will be writing their anecdotal account soon.