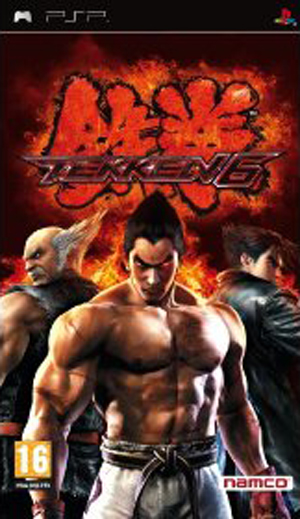 Tekken 6 PSP is a Fighting game available on the PSP 360. It can be played in Thirdperson Singleplayer Competitive modes.

Tekken 6 PSP is a Fighting game. Fighting games revolve around the interaction of two or more characters in some form of physical combat. Players learn to control characters through either memorisation of button combinations to access more advance moves, or by their reactions and accurate timing.

Tekken 6 PSP can be played in a Thirdperson mode. Third Person games view the world from over the right shoulder of the character being controlled. This enables you to see the character you are controlling as well as their surrounds. Although not as immersive as first person, third person games enable more complex moves and interactions with the environment.

Tekken 6 PSP can be played in a Singleplayer mode. Single Player Campaign games focus on one player's experience. Rather than collaborate with other players either locally or online, players progress alone. The campaign style of gameplay offers a connected series of challenges to play through. These chapters work together to tell a story through which players progress. Single player games are able to focus on one experience of a scenario, so that it is usually a richer, more visceral game.

Tekken 6 PSP can be played in a Competitive mode. Competitive Multiplayer games provide experiences where players compete against each other and the computer. Obviously lending itself to sports and team games, these competitive engagements have also dominated the shooting and fighting genres because of the direct combat and expertise involved in each. Although these games were originally played in a split screen style, more recently they are played online via services such as PlayStation Network, Xbox Live and the Nintendo Wireless Connection.

We have our reporters and community keeping an eye on Tekken 6 for you, and we'll keep you up to date with the latest developments as they happen.

Tekken 6 for Sony's PlayStation Portable redefines the handheld fighting game genre with its excellent controls and engaging style. The new High-definition graphics and flawless 60 frames per second mean that this latest iteration of the popular fighting game is the best yet. With forty unique characters to master and destructible scenery you can punch your enemies through, Tekken 6 for PSP is the best fighting game you can buy for a portable system.

Ports of fighting games have always struggled to replicate the look and feel of the arcades and have done an even poorer job with console translations. But Tekken 6 for PSP shows that it's not only possible to deliver a decent fighting experience, but you can actually create a game that benefits from being on restricted hardware.
read on...

Packing HD graphics running at a blistering sixty frames per second, there's never been a fighting game that looks as good. Taking on even the cartoon styling of Street Fighter 4, Tekken 6 on 360 and PS3 hits the ground running with a whole host of new features, including an updated storyline, ground breaking online modes. These join the headlining dynamic, destructible environments and unrivalled character customisation system to make this a tour de force of versus fighting. Like the characters themselves, this Xbox 360 and PlayStation 3 title is something to be reckoned with.

As one of the longest running beat 'em up franchises in the world, Tekken 6 had a lot to live up to; but once you get into it, it surpasses all expectations. Combining the original Japanese arcade game of the same name, with the additional characters from the pseudo expansion, Bloodline Rebellion, and some updated visuals and mechanics for a western audience, Tekken 6 is a fantastically well rounded package.
read on...