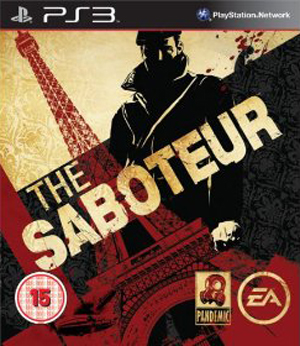 The Saboteur is a Adventuring game available on the PS3 360. It can be played in Thirdperson Singleplayer modes.

The Saboteur is a Adventuring game. Adventure games are enjoyed for two reasons: they provide enemy encounters that require tactics and strategy to conquor, and they create a fantasy world in which to explore and adventure.

The Saboteur can be played in a Thirdperson mode. Third Person games view the world from over the right shoulder of the character being controlled. This enables you to see the character you are controlling as well as their surrounds. Although not as immersive as first person, third person games enable more complex moves and interactions with the environment.

The Saboteur can be played in a Singleplayer mode. Single Player Campaign games focus on one player's experience. Rather than collaborate with other players either locally or online, players progress alone. The campaign style of gameplay offers a connected series of challenges to play through. These chapters work together to tell a story through which players progress. Single player games are able to focus on one experience of a scenario, so that it is usually a richer, more visceral game.

We have our reporters and community keeping an eye on The Saboteur for you, and we'll keep you up to date with the latest developments as they happen.

Using World War Two as a backdrop for its story, The Saboteur left me divided about whether its technical shortcomings obscured the dramatic setting of Nazi occupied Paris. I loved the vengeance-driven narrative and the use of colour to depict the city's oppressed state, but I found the game falling short of the epic open-world environment the first two hours had expertly setup. Those heights were never reached again but despite The Saboteur's many failings in execution and technical competance, I couldn't help but enjoy nearly every moment of this different World War 2 game.

Thanks to my personal interest in all aspects of World War 2, The Saboteur was already a game that piqued my interest before I even started to play it. The premise of playing as Sean Devlin, a vengeance-seeking Irishman based on the real-life war hero William Grover-Williams, in the streets of occupied Paris was a fascinating thought.
read on...

Using World War 2 as a backdrop to its story rather than the focus, The Saboteur for the Xbox 360, PS3 and PC tells a personal tale of revenge against the Nazi war machine that shows the World War 2 setting still has the capability for telling dramatic and moving stories. Putting players in control of Sean Devlin, an Irish race car driver who joins the Special Operations Executive, you'll be conducting a guerrilla campaign against the occupying Nazi troops in Paris. With an open-world third person presentation, this is a very different World War 2 game that mixes elements of Mercenaries 2 and Okami for a subtle and atmospheric experience.

The Saboteur sets itself apart from the usual World War 2 games by taking a different approach to both its setting and the story it tells. Rather than sticking to a first-person shooter model, the game pulls the camera back to favour a third-person viewpoint similar to that of Grand Theft Auto or more specifically Mercenaries 2, the developer’s previous game. This approach enables The Saboteur to offer a much wider range of gameplay mechanics than just shooting Nazi's and blowing up stuff.
read on...