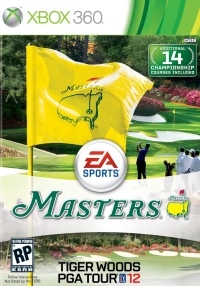 Tiger Woods 12 is a Sporting game available on the 360 Wii PS3. It can be played in Singleplayer Turnbased modes.

Tiger Woods 12 is a Sporting game. Sports games recreate a wide variety of real life competitive activities. Depending on the sport, these will either have an action or strategy focus. Popular sports games are often released on an annual basis, each year the game receives new player rosters and game improvements.

Tiger Woods 12 can be played in a Singleplayer mode. Single Player Campaign games focus on one player's experience. Rather than collaborate with other players either locally or online, players progress alone. The campaign style of gameplay offers a connected series of challenges to play through. These chapters work together to tell a story through which players progress. Single player games are able to focus on one experience of a scenario, so that it is usually a richer, more visceral game.

Tiger Woods 12 can be played in a Turnbased mode. Turn Based games are played in turns, so that players can stop and consider their next move. This is common in tactical experience such as strategy or adventure games as this enhances the sense of control and planning the player has. Other genres - such as sporting, fighting and rhythm action games obviously rely on realtime game play.

Tiger Woods 12 consolidates both technology and brand as the series mirrors Tiger's return to normality. The Master nomenclature looks to underline similarities in the three - MotionPlus, Move or Joypad controlled - versions of the game, but it will be the usability of controls that will be make or break for Tiger 12.

Last year's Tiger Woods releases were a mixed bag. Tiger 11 (Wii) was the fifth motion controlled version of the game on the Wii (and the second supporting MotionPlus), which meant it could finesse every aspect of play. Tiger 11 (PS3) on the other hand offered innovative new Move controls that broke new ground on the platform, with all the associated missteps and pain that usually brings. Then of course Tiger 11 (360) continued its steady progress from previous years with fewer novelties but, some would say, more sensible development decisions.
read on...

i wouldn't describe myself as a big golf fan. for most of the year, if i stumble across televised play whilst flicking, then i'll likely move on. and yet, as seems to be true for a surprisingly large number of people, there is one event that has always captured my dedicated attention in a way that far surpasses all its peers - The Masters.

i've watched The Masters not just devoutly, but often as the magical, wide-eyed culmination of at least a week of keen expectation, ever since i was at primary school. it's one of the few big American events that is relayed over here, and has, over the years, offered annual access to a phenomenon that still maintains a significant part of the thrill that it offered me as a child: coverage sharing.
read on... Tiger Woods 12 Wii introduces the Balance Board to its golfing swing. MotionPlus, excellent online play and improved visuals, make the Wii version hard to beat -- even by the PlayStation 3 Move edition.

Sports games recreate a wide variety of real life competitive games. Depending on the sport, these will either have an action or strategy focus. Popular sports games are often released on an annual basis, each year the game receives new player rosters and game improvements.
read on...