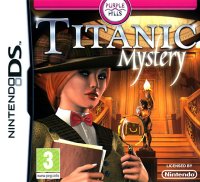 Titanic Mystery is a Rhythmaction game available on the DS. It can be played in Competitive Cooperative modes.

Titanic Mystery is a Rhythmaction game. Rhythm action games combine the enjoyment that comes from creating music with the challenge of video game scoring. The player is usually tasked with dancing on a mat, tapping a touch screen, pressing a button, singing into a mic or strumming a fake guitar controller in time with the music.

Titanic Mystery can be played in a Competitive mode. Competitive Multiplayer games provide experiences where players compete against each other and the computer. Obviously lending itself to sports and team games, these competitive engagements have also dominated the shooting and fighting genres because of the direct combat and expertise involved in each. Although these games were originally played in a split screen style, more recently they are played online via services such as PlayStation Network, Xbox Live and the Nintendo Wireless Connection.

Titanic Mystery can be played in a Cooperative mode. Cooperative Multiplayer games provide an experience that is played symaltaneously by multiple players. Unlike the simple arena competitive multiplayer style games where players try to kill the most enemies, true co-operative games are designed to take a group of players through a campaign experience together. This will involve sections where players have to work together to proceed - either from the sheer difficulty as in Halo 3 on 360 or by the design of levels such as LittleBigPlanet on PS3.

We have our reporters and community keeping an eye on Titanic Mystery for you, and we'll keep you up to date with the latest developments as they happen.

Titanic Mystery DS offers a hidden object driven story that uses its theme well. The surrounding legend of the Titanic lends an enjoyable sense of weight to proceedings of this Nintendo DS puzzle game.

Not a million miles away from the 1912 Titanic Mystery PC game, the developers have revisited their game to freshen it up for Nintendo DS. The premise is the same, and just as enjoyable, find hidden objects in the detailed locations, and solve some mind bending logic problems.
read on...