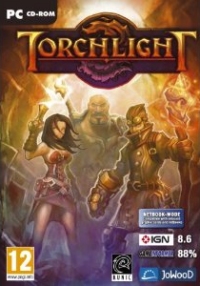 Torchlight is a Adventuring game available on the PC. It can be played in Thirdperson Singleplayer modes.

Torchlight is a Adventuring game. Adventure games are enjoyed for two reasons: they provide enemy encounters that require tactics and strategy to conquor, and they create a fantasy world in which to explore and adventure.

Torchlight can be played in a Thirdperson mode. Third Person games view the world from over the right shoulder of the character being controlled. This enables you to see the character you are controlling as well as their surrounds. Although not as immersive as first person, third person games enable more complex moves and interactions with the environment.

Torchlight can be played in a Singleplayer mode. Single Player Campaign games focus on one player's experience. Rather than collaborate with other players either locally or online, players progress alone. The campaign style of gameplay offers a connected series of challenges to play through. These chapters work together to tell a story through which players progress. Single player games are able to focus on one experience of a scenario, so that it is usually a richer, more visceral game.

We have our reporters and community keeping an eye on Torchlight for you, and we'll keep you up to date with the latest developments as they happen.

Torchlight PC draws inspiration from Diablo and proves that time and advancement haven't withered the formula for a nostalgic gamer like me.

The staggering power of modern technology leaves me bewildered. I feel old saying it, but being able to see exactly where I am in the world on a phone no bigger than a miniature notepad sill blows my mind.
read on... Torchlight PC doesn't try to be deep or complicated. The dark foreboding mine was unnerving but never really got under my skin. Although shallow, in small doses it was an immensely entertaining game.

Torchlight starts out in an extremely appealing yet simplistic manner. I had the choice of three different character classes and decided to go with the Destroyer, assuming he'd be the simplest character to learn. I was right; usually a right click did everything I needed to achieve. Choosing a dog or cat as a pet that could fight alongside me was a nice touch too. I immediately personalised my feline friend with the name of my real life cat. It created a nice bond with my character.
read on...