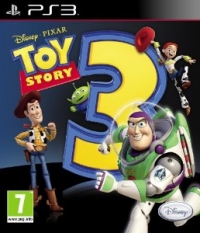 Toy Story 3 is a Adventuring game available on the PS3 360 Wii.

Toy Story 3 is a Adventuring game. Adventure games are enjoyed for two reasons: they provide enemy encounters that require tactics and strategy to conquor, and they create a fantasy world in which to explore and adventure.

We have our reporters and community keeping an eye on Toy Story 3: The Video Game for you, and we'll keep you up to date with the latest developments as they happen.

Toy Story 3 PS3 captured my wife's imagination as she unusually demanded to take control and compulsively set about collecting all the stars. This Toy Box open world, combined with the Story mode, is an impressive package. If you love to collect' em all, this game has loads to do with only a few rough edges causing occasional frustration.

Toy Story 3 is two games in one, it backs up a standard platform romp with a fully featured sandbox mode that emphasises exploration and fun and will last considerably longer. My interest came from the developer's previous Just Cause games, which match huge open worlds with maximum destruction.
read on...

Toy Story 3 imagination wins through to create a game of real variety. Creative moments abound in both the story and open world modes - one for all the family to enjoy, casual or hard-core.

The Toy Story 3 movie almost didn't happen because they were worried it might cheapen the brand. No such qualms in videogame land though, where movies are knocked off as derivative games almost daily.
read on...

Toy Story 3 Wii celebrates the franchise as much as offering a film tie-in experience. The Wii version promises to be impressively similar to the 360 and PS3 version. More surprising though is the level creation Toybox mode.

Toy Story 3: The Video Game on the Nintendo Wii has at its centre a platform game where you can play as either Sheriff Woody, Buzz Lightyear, or Jessie - each with their own special abilities. Woody for instance can use his pull string to Tarzan-swing across gaps, Buzz can throw objects long distances, and Jessie has more agility.
read on...