Transformers War for Cybertron on 360 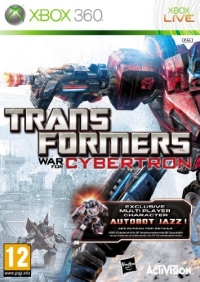 Transformers War for Cybertron is a Shooting game available on the 360. It can be played in Thirdperson Singleplayer modes.

Transformers War for Cybertron is a Shooting game. Shooting games present a world in which the character must shoot their way out of dangerous situations. They provide the player with an array of weapons tailored to specific tasks. This unavoidably involves a combination of fisticuffs and gun based fighting that dictates the violent nature of these experiences. Beneath this harsh exterior though is often an intricate tactile game - and this is usually what drives the player.

Transformers War for Cybertron can be played in a Thirdperson mode. Third Person games view the world from over the right shoulder of the character being controlled. This enables you to see the character you are controlling as well as their surrounds. Although not as immersive as first person, third person games enable more complex moves and interactions with the environment.

Transformers War for Cybertron can be played in a Singleplayer mode. Single Player Campaign games focus on one player's experience. Rather than collaborate with other players either locally or online, players progress alone. The campaign style of gameplay offers a connected series of challenges to play through. These chapters work together to tell a story through which players progress. Single player games are able to focus on one experience of a scenario, so that it is usually a richer, more visceral game.

We have our reporters and community keeping an eye on Transformers: War for Cybertron for you, and we'll keep you up to date with the latest developments as they happen.

Transformers War For Cybertron 360 attempts to give the iconic giant robots the same dark, fan-pleasing makeover that Batman received in the acclaimed Arkham Asylum. While it isn't quite up to that standard, it is still the best Transformers game yet, and a surprisingly challenging third person shooter.

I love Transformers, the comics were one of the great sprawling narratives of my childhood. Optimus Prime is one of the purest hero figures in fiction, sacrificing his life for the sake of mankind and rising again on not one but at least half-a-dozen occasions.
read on...

Transformers: War for Cybertron swept me along with Prime, Ratchet and Bumblebee, back to the beginning of the troubles. New enough for my kids and yet old enough to evoke my own childhood, there was a lot to enjoy here.

Transformers were all the rage when I was young. The toys, the TV cartoon, and the movie all hold special places in my childhood memories. And I don't mean the Michael Bay movie, I mean the cartoon one where Optimus Prime ends up dead.
read on...