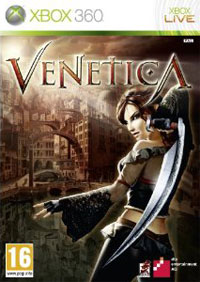 Venetica is a Adventuring game available on the 360. It can be played in Thirdperson Singleplayer modes.

Venetica is a Adventuring game. Adventure games are enjoyed for two reasons: they provide enemy encounters that require tactics and strategy to conquor, and they create a fantasy world in which to explore and adventure.

Venetica can be played in a Thirdperson mode. Third Person games view the world from over the right shoulder of the character being controlled. This enables you to see the character you are controlling as well as their surrounds. Although not as immersive as first person, third person games enable more complex moves and interactions with the environment.

Venetica can be played in a Singleplayer mode. Single Player Campaign games focus on one player's experience. Rather than collaborate with other players either locally or online, players progress alone. The campaign style of gameplay offers a connected series of challenges to play through. These chapters work together to tell a story through which players progress. Single player games are able to focus on one experience of a scenario, so that it is usually a richer, more visceral game.

We have our reporters and community keeping an eye on Venetica for you, and we'll keep you up to date with the latest developments as they happen.

Venetica keeps its emphasis firmly on blade-swinging over deeper role-play mechanics, but struggles to rise above various technical deficiencies and delivers a broken, if inoffensive experience.

In the opening scenes to Venetica I was fooled into thinking it would develop along typical European RPG lines. In a rural village where the yokels herd pigs and rosy-cheeked women carry pails of milk I expected the surprise attack by mysterious forces, the devastating fire and the tragic death of an important character. What I didn't expect, even though the female protagonist is on the box and menu for the game, is for the dashing Benedict, Scarlett's literal knight in shining armour, to get one between the shoulders.
read on...