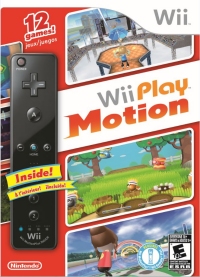 Wii-Play Motion is a Minigames game available on the Wii. It can be played in Competitive Cooperative Sharedscreen Splitscreen modes.

Wii-Play Motion is a Minigames game. Mini games come in a variety of shapes and sizes. What unites the genre is the speed with which players can pickup the games and the relativley short time requried to complete a level or two.

Wii-Play Motion can be played in a Competitive mode. Competitive Multiplayer games provide experiences where players compete against each other and the computer. Obviously lending itself to sports and team games, these competitive engagements have also dominated the shooting and fighting genres because of the direct combat and expertise involved in each. Although these games were originally played in a split screen style, more recently they are played online via services such as PlayStation Network, Xbox Live and the Nintendo Wireless Connection.

Wii-Play Motion can be played in a Cooperative mode. Cooperative Multiplayer games provide an experience that is played symaltaneously by multiple players. Unlike the simple arena competitive multiplayer style games where players try to kill the most enemies, true co-operative games are designed to take a group of players through a campaign experience together. This will involve sections where players have to work together to proceed - either from the sheer difficulty as in Halo 3 on 360 or by the design of levels such as LittleBigPlanet on PS3.

Wii-Play Motion can be played in a Sharedscreen mode. Shared Screen Multiplayer games create a multiplayer experience where players all share the same screen space. Rather than splitting the screen into portions for each player the game scales to fit each player in view even when they are a long way apart. Football and fighting games often take this approach as the shared view doesn't impede the players ability to take part in the action.

Wii-Play Motion can be played in a Splitscreen mode. Split Screen Multiplayer games involve multiple players by providing a portion of the screen for each person. This enables two, three or four players to be involved in the game using just one console. Although popular for the PS2, Gamecube and Wii it is becoming less common in modern 360 and PS3 games which are less willing to sacrifice horsepower from the visuals to accomodate the extra players - they opt for an online multiplayer mode instead.

Wii Play: Motion resolves the Wii's fiddly pointing mechanic with an update of the launch title that now leverages MotionPlus. It joins Wii-Sports Resort and Wii-Party to create a tour de force of Wii minigames.

Wii Play: Motion offers 12 new games that involve the Wii-Remote's enhanced abilities with the MotionPlus block attached. This enables the console to accurately detect both orientation as well as motion.
read on...

Wii-Play Motion sounds like another derivative Wii game, but is actually another helping of family gaming magic.

Wii-Play Motion is the follow up to Wii-Play, the Wii launch game. Unlike the original though, that relied totally on the Wii's fiddly (and frustrating for young players) pointing mechanic, Wii-Play Motion uses the new MotionPlus controllers to make things easier and more accurate.
read on...