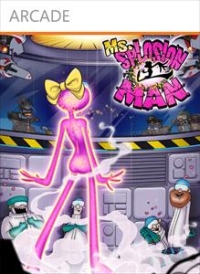 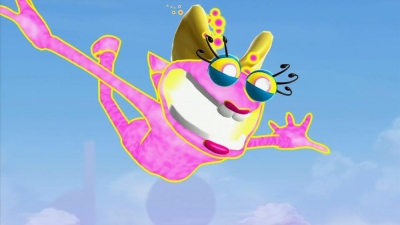 Ms Splosion Man may be pink but is no more intimate than her masculine counterpart. The same formula is fun for a while, but in the end I went looking for interesting characters and conversations elsewhere.

Arcade games aren't exactly known for their in depth plot-lines and diverse characters. Their uniqueness is in their ability to tell a fulfilling story on a smaller scale.

However, whilst playing Ms. Splosion Man, I didn't feel that there was much more than an original premise. I had wanted to discover how Ms. Splosion Man fitted into the universe established by her boyfriend (or perhaps husband) Splosion Man, but it was not exactly the most intimate or deep of games. It was fun to play, but it didn't really offer me anything more than that.

I have not played any Splosion Man games before and had no expectations, or in fact very much idea of what might happen. I had, however, hoped to find some sense of reason within Splosion Man world, but discovered quickly that this wasn't going to be the case. The story is essentially just: Splosion Man is captured.

It had it moments when I thought that there might be something beyond the explosions, when faced by new enemies and certainly in the very opening level when being chased by a giant robot. BUt amidst the tension that put me on the edge of my seat Ms. Splosion Man seemed almost entirely unaffected, completely oblivious to events around her.

I know this is just an arcade game, but a little bit of relational intimacy or characters to engage with would have got me through the battering gameplay. But without this, I never really became involved in the game or the character of Ms. Splosion Man.

It was not exactly the most intimate or deep of games.

Sure, she was entertaining with her singing and dancing, in a pop-culture referencing kind of way, but there was no substance beyond this, no personality of her own. It made it difficult to like her, she reminded me of a classic Loony Toons character, entertaining but not exactly unique. Fun for an entertaining evening, but certainly not someone to regularly date.

She left no food for thought, I was not for a moment interested in what she had to say or indeed if she had anything to say at all, it felt to me that she was not even aware of whatever goal she had.

Although Ms Splosion Man may not be for everyone, at least it didn't pretend to be anything more than what it is - an exciting, exploding, puzzle, platformer. For whatever reason, it lacked characters and conversations, but the game itself seemed to make up for it.

It lacked conversations, but the game itself seemed to make up for it.

Ms. Splosion Man didn't leave me hungry for more. I experienced it, and left it at that, it was easy to just leave behind. Male or female it appeared as though it wouldn't have made a difference to the game, to me, it just looked like yellow had been traded in for pink.


You can support Emma by buying Ms Splosion Man