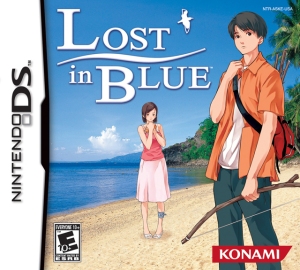 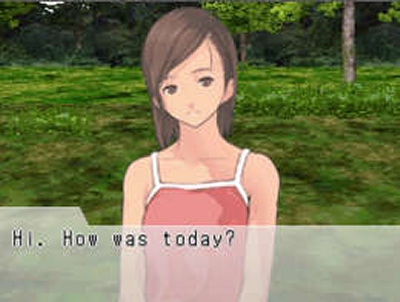 Lost in Blue is a really fun game, but there's no denying it is extremely sexist and portrays women as helpless and unable to look after themselves. In this game's world, it's very much all about ‘traditional' gender roles -- that is, the woman staying at home making house and cooking dinner, and the man going off and having exciting adventures, providing for the lady, but spending very little actual time with her. I found the backstory as to why the two young castaways have to do this to be wholly unconvincing. It's rare that a game makes me angry for reasons other than frustration at being stuck, but Lost in Blue did.

Two young survivors of a shipwreck - Keith and Skye -- find themselves washed up on the shore of a mysterious and (seemingly) deserted island. I have to admit, the idea of finding myself marooned on an uninhabited island has always appealed to me since first reading Robinson Crusoe as a young girl. I loved the idea of getting away from the pressures of modern life and living a simpler existence somewhere where the sun shined every day. So I bought Lost in Blue as soon as I could get hold of a copy to live out my fantasy in a game.

I realised quite early into it that I didn't really like either of the two characters. Shortly after the start of the game, Keith discovers Skye washed up on the beach, and glad of some company, rushes to check that she's ok. Skye comes to and explains that she has lost her glasses and can't see without them. Keith offers to look for them for her, but having found them, manages to step on them and break them beyond repair. This is when I started to dislike Keith, and I really don't understand why this was written into the story. Wouldn't it have been easier to simply say that she'd lost her glasses while on the lifeboat in the choppy sea? If I had been Skye, I certainly wouldn't have been so forgiving or nonchalant about it - I'd have decked him.

Everything she says and does is simpering, obedient, and subservient.

Without her glasses, Skye is apparently as good as blind and can't see more than about three inches from her face. After taking two steps on a perfectly smooth, sandy beach, she promptly collapses, proclaiming that her eyesight is just too bad to walk unaided. Keith seizes on the chance to play her knight in shining armour by holding her hand to lead her around, something he has to continue to do for the rest of the game for her to go anywhere. Her atrocious vision means that once Keith and Skye set up camp in a nearby cave, Keith gets to do all the fun stuff like exploring the island and hunting animals, while Skye is stuck inside doing the cooking and weaving baskets. Come on, how blind is this chick? If her vision is really that bad, then wearing glasses wouldn't have been much help in the first place. How on earth did she survive day to day life back in the real world? She's so pathetic I couldn't find much empathy for her either.

One of the game's mottos is 'let's work together' and the idea is that you'll need to use both Keith and Skye and their unique skills to finish the game. In reality, Skye's just a mechanic to slow down the gameplay. As she needs Keith to go and fetch her food and water, you'll need to keep backtracking to the cave to sort her out with supplies before retracing your route back halfway round the island. If you don't manage to get back to her before she runs out of food or water, she'll kark. Which I personally don't think is much of a problem, but unfortunately, that also means it's game over.

Occasionally, Keith will come across a puzzle on his travels which needs two people to solve - for example pushing a really big stone out of the way. For this, he'll need to let Skye come out of the cave and see daylight briefly and drag her along (quite literally) to wherever they both need to be. Once she's helped out, Keith escorts her back to the cave again and goes on his merry way.

Skye cannot be directly controlled, at least in the main game. Keith interacts with her by bossing her around from a series of dialogue options - he can ask her to make something like baskets or rope, cook him his dinner, give her some food for her to use to cook him his dinner, or tell her he's off ‘out' for a few days. Everything she says and does is simpering, obedient, and subservient - for example, if the fire goes out, she says she's really, really sorry, but she just can't do any cooking without heat, could he possibly, if he doesn't mind and he's not too busy, go out and get some firewood so she doesn't freeze to death?

I don't really consider myself a feminist, but something about this game really made me mad. I think it was the fact that the developers didn't even go to the effort of thinking up a good back story to explain the reasons why Skye has to stay in a cave for the entire game. It doesn't make any sense that however short-sighted she is, she cannot even manage to go outside and walk a short distance to find food and water and will instead starve to death without Keith's intervention.

All of those things make me even more angry that the game was ruined for me by the needlessly sexist roles given to the two characters.

Once the main game is complete, you have the option of playing as Skye, but this is pretty much as dull as it sounds. In this mode, at least she can wander around a little bit, although she can't go as far as Keith since apparently she can't jump or climb as high. In this mode, you concentrate on basically, well, waiting around for Keith to do his thing so you can get off the island. In the meantime, you'll make him a packed lunch every day, ask him how he's feeling, milk the goat, and try to make him fancy you.

I loved lots of things about this game - my favourite part was fishing, which sounds completely boring, but it was actually really fun, honest! Foraging for items and hunting animals were very addictive, which is just as well, as to get to the end of the game I needed to do an awful lot of both. I enjoyed exploring the island, although the backtracking to the cave got extremely tedious. All of those things make me even more angry that the game was ruined for me by the needlessly sexist roles given to the two characters.

You can support Emma by buying Lost in Blue