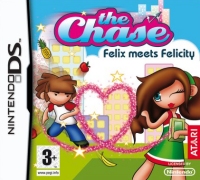 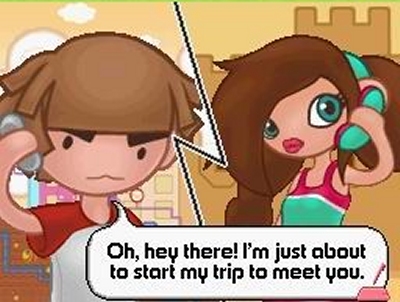 The Chase: Felix Meets Felicity adds rom-com cliche to its platforming gameplay on the DS. Romantic missteps aside, although I enjoyed the gameplay for a while, no saving resulted in too much repetition for me.

The Chase: Felix Meets Felicity is a platform game about two young slackers who fall in love at first sight. Unfortunately for them, however, when the day of their date dawns, actually getting there proves to be more than a little problematic. The gameplay is fun and inventive, but not being able to save the game was extremely frustrating. I also found the whole 'if only I had a boyfriend I would be happy' message to be really tired.

Felix and Felicity, like their names, are pretty much identical except for their gender. Felix works as a delivery boy for a grumpy boss and spends half his work time staring longingly at happy couples out of the window and the other half frantically rushing from place to place with packages that he's late delivering. He doesn't seem to have any ambitions, other than to get a girlfriend, but he hasn't even been on a date for a very long time.

Felicity too works as a delivery girl, and also longingly wishes she wasn't single. Felix likes to spend his days off sitting on the sofa in his y-fronts playing video games. Felicity likes video games too, especially the ones where you get to collect fruit. They appear to be each other's mirror image and, despite the fact that probably half the world also has a crap job and likes video games, when they meet, they both decide they are obviously destined for each other.

You can play as either Felix or Felicity, it's essentially the same game, and having found your future spouse and sorted your first date out, there's just one small problem. You're broke. Well, of course you are, what with that McJob and the fact that you probably don't even bother turning up to it half the time. Obviously, you don't have a car, since that would involve paying for lessons and taking the time to study for a test. And since you're so financially embarrassed, rather than being able to take a bus or a train to the meeting place, you're going to have to use your skateboard. There's a storm brewing, too, which you'll need to travel fast to avoid, otherwise you lose a life, although why is never really explained - turning up to a first date sopping wet a no no, perhaps?

Getting a girlfriend isn't going to stop Felix from hating his job or his grubby apartment .

Although I do realise that the story is slightly tongue in cheek, it really annoyed me to see yet another example of the 'boy meets girl and then they live happily ever after, the end' fairy tale. It seemed to me, growing up, this idea that finding a partner would solve all your problems and make you happy was constantly reinforced to me through various stories and films. It's just not true, and it's a dangerous idea because it encourages people to - instead of taking responsibility for improving their own lives - search for that 'perfect' man or woman and lay the burden at their door.

Getting a girlfriend isn't going to stop Felix from hating his job or his grubby apartment - why doesn't he turn his efforts to trying to get a new one, or maybe go back to school? If he really wants to meet someone, he's unlikely to do that when he spends all his free time on his sofa (although I suppose there's always Xbox Live) - why doesn't he make more of an effort to get out more? I found that I had little sympathy for either of them - they both seemed like total losers to me.

As you journey through a series of increasingly tricky levels, along with your other tasks, you'll also need to collect a certain amount of flowers along the way, to give to your beloved as a gift. There are also other tasks you have to undertake to prove your worthiness, like rescuing fluffy kittens and puppies, and er... turtles. Oh, and, if you're late, don't think your date will hang around waiting for you. It seems even true love will scarper if you're a few minutes behind schedule.

Usually it's embarrassingly obvious when someone fancies someone else, both to the person they fancy and everyone else around them.

So now we've moved straight from one cliché into another; that of 'the test of love'. I suppose part of the problem is that in terms of gameplay mechanics, tests are an incredibly useful plotline - a test means a series of challenges which readily translate into gameplay levels, goals to achieve and tasks to complete.

There's a similarly tired cliché in rom-com movies - the moment right at the end of the film, where the hero (or heroine) has an epiphany when they realise that all they need to do is tell the object of their affections that they are in love with them. If they can just do this, then everything will be alright, and all other barriers to their relationship will magically disappear. The problem is not, for example, the fact that they're currently walking down the aisle in a church about to get married to another man, the problem is simply that the hero doesn't know WHICH church that is. The premise makes for some great dramatic final scenes as the hero races against time to 'tell her how he really feels'.

Of course, in reality, it doesn't really work like that. Usually it's embarrassingly obvious when someone fancies someone else, both to the person they fancy and everyone else around them. I'd say that there aren't many people who, truthfully, don't have any idea that someone has a crush on them, so telling them about it isn't going to be some life-changing moment. They've noted your interest and ignored it.

In my experience, someone either fancies you or they don't.

It's the same with tests of love - in real life, tests of love just don't work. In my experience, someone either fancies you or they don't. If they do, you won't really need to do anything in particular to convince them to be with you other than be yourself, and if they don't, nothing you do is ever going to change that anyway. But of course, if this story didn't involve the star-crossed lovers having to skate their way through 40 levels of obstacles to prove their worth, there wouldn't have been any game.

I found that if I ignored the story and the characters in Felix Meets Felicity completely, the gameplay itself was actually great fun. For example, I liked the way that once you have enough energy, you can grind your way through the streets, sending businessmen in suits flying through the air, which was very satisfying. However, the game doesn't let you save - ever. So, after a certain number of continues, you have to go all the way back to the beginning and start again. Ultimately, this was what really killed the game for me and made me stop playing, not my dislike the characters or the silly story.

You can support Emma by buying The Chase: Felix Meets Felicity