Other GamePeople columnists have reviewed this from their perspective - huh?:
Soulful Gamer (PC) 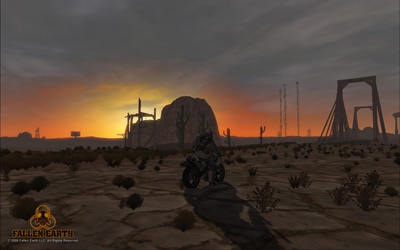 Fallen Earth is a Massively Multiplayer Online Role Play Game (MMORPG) for people who want something that's a bit more Mad Max than Harry Potter. Set in a realistic post-apocalyptic world, and using first-person shooter dynamics, it's obviously trying to attract the hardcore gamer crowd. It's very, very pretty, and the quests are varied and fun, but after a while I found myself thinking - what's the point?

First there's the waiting for the download (and this one takes longer than most, at just under 5GB), then there's installing. Then you have to set up your account, and THEN you have to download and install the updates -- which despite the fact that the game was only released a day ago when I first loaded it up -- seemed to take almost as long as downloading the original files. Some really odd little thing always goes wrong which means you have to trawl the forums for a workaround solution. The set-up process for Fallen Earth reminded me of one of all of the very good reasons I intensely dislike the set-up processes for MMOs.

Finally good to go, and after spending another 15 minutes or so trying to pick a name which hasn't already been taken (seriously, am I really that unimaginative with the names I choose?), we then come to what I think is probably my favourite part of RPGs -- designing my character. I loved the extensive tattoos and face paint options you could add and the creepy array of weird eyes. I gave my character completely black, shining eyes with splashes of black face paint around them and a pillar box dreadlocked hairdo. She looks like something from Doomsday or Mad Max. In fact, I suspect that both were heavy influences on the game.

The game world is incredibly atmospheric and I found myself spending a lot of time simply wandering around in it and enjoying the environments.

Feeling thus suitably attired for the apocalypse, I entered the game. The first thing I noticed is that, compared to other MMOs, levelling seems to take forever. To ease the pain, you get a small amount of AP periodically to distribute without levelling. That didn't work for me -- I like short levelling times (at least at the start) where I get a bunch of AP to spend. It feels like getting a birthday present. And getting a birthday present in little bits just doesn't cut it.

The game world is incredibly atmospheric and I found myself spending a lot of time simply wandering around in it and enjoying the environments. There seemed to me to be something interesting to see in just about any random place I chose to go -- an overturned school bus, or an overgrown military airbase, or the ruins of an old fairground. The rendered sunsets are particularly lovely. Give me a nice apocalypse over some elves' enchanted forest any day of the week!

Technical problems marred the first couple of weeks after the game's launch, but after a series of patches and a few annoying server rollbacks, everything seems to be pretty much shipshape now. I have to admit I was pretty addicted to Fallen Earth for a while. Friends of mine are very into World of Warcraft, but it just didn't do it for me. I had high hopes for Fallen Earth being the MMO of my dreams, as I've always been into sci-fi as opposed to fantasy.

Harvesting items from the environment, hunting for scrap metal, and crafting items were all really good fun and quite addictive.

It looked for a while as if I might happily lose my life to it - once I'd finished on my starter town (Depot 66), I realised I could go check out all the other starter towns too, which each had very different looks and quests. I really enjoyed being overlevelled and knocking down ferocious looking bandits with one whack of my baseball bat. The quests didn't yield much experience, but quite a few also gave AP, so I could still improve my character. Harvesting items from the environment, hunting for scrap metal, and crafting items were all really good fun and quite addictive.

Then I went to log on one evening and realised I didn't want to play anymore. I just suddenly lost interest in it. I think the trouble with MMOs for me is that they are essentially like soap operas - they don't have a real story because the story is designed to continue every week and never end. You also don't really engage with any of the other characters, because there aren't really any other characters - NPCs are basically only mission generating machines. Of course, there are the other players, but, well, unfortunately the vast majority of them seem to be permanently stuck in mental adolescence.

Fallen Earth, I'm sorry. It started off so well and looked like it might last, but now I think it's time we called it quits. It's not that there's anything actually wrong with you. It's not you, it's me. No, really, it is.

You can support Emma by buying Fallen Earth