Other GamePeople columnists have reviewed this from their perspective - huh?:
Returning Gamer (PC) 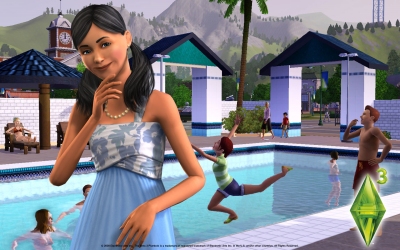 To be brutally honest, The Sims 3 doesn't really add anything really new in the intimacy stakes - this is essentially the same game all over. On the surface, The Sims 3 on PC and Mac seem to be all about relationships, but in reality I've come to the conclusion that it is actually about the joys of capitalism and specifically, shopping – both virtual and real.

Best described as a 'virtual dollhouse', the first Sims game was released in 2000, and since then there have been countless expansions and a sequel in 2004. The third game in the series, the predictably named Sims 3, was released in June 2009. An expansion back has already been unleashed since then, The Sims 3 : World Adventures.

Nothing has really dramatically changed from the previous games – the big selling point is that Sims can now go into town without a loading screen. It was interesting to find that romantic relationships work in much the same way they always have. First you'll need to build up a friendship with somebody through actions like chatting to them, telling them jokes and giving them compliments. Once you're officially friends, you can start to get romantic, first by flirting, handing hands and stroking their cheek.

Then you can move up to more passionate kisses, making out, and eventually the 'WooHoo' option will appear on the interactions dial – the game's euphemism for sex. Being a family-friendly game, the amorous couple will then retire to the bedroom where, after fluffing up the pillows a little, they will jump under the covers and out of sight to do the dirty deed. Cute.

All of the Sims seem to be down for whatever, with no particular preference for men or women.

As in previous games, it is easier to become romantically involved with someone who shares at least one interest with you. At the start of the game, you can also give your Sim traits that will help them have rewarding relationships, for example Charismatic, Family Oriented and Flirty. However, if they have traits like Dislike Children or Commitment Issues, they're going to have a tough time settling into family life. As far as I can tell, you can convince absolutely anyone to be your beloved if you are simply persistent enough about it.

People who are already married or in a long-term relationship are no problem – just get friendly enough then ask them to split with their current partner. All of the Sims seem to be down for whatever, with no particular preference for men or women, and any character can enter into either a straight or same sex relationship. This time round, gay couples can get married and have a big wedding day just like straights. If you want to start a family as a same sex couple, you can adopt kids.

If you bore of your partner, you can just choose the option divorce on the 'Mean' menu. Once you've untied the knot, there are a variety of different options as to how to divvy things up – you can kick one partner out with nothing but the clothes on their back, you can stay living together, or you can give them some funds as you send them on their way.

Ultimately, as much it tries to be about relationships, The Sims is actually really about shopping. Designing your dream pad and fitting it out with cool gear is most of the fun, and that will take money, so you'd better tell those Sims to put their shoulders to the wheel.

It's virtually impossible to play the game without having your Sims hold down steady jobs, and if you try and do so (you could try living solely from mooching money off other Sims, for example) you'll miss a lot of the game's content – work-related events and decision boxes won't appear, and most of the events in town will be unaffordable, along with the equipment and books you need to improve your skills. Previously in The Sims 2, EA decided to just do away with the quaint idea of adding new gameplay elements in its expansion packs, and just made them quite literally all about shopping (H&M stuff and IKEA stuff).

This game subscribes wholesale to the American dream -- if you work hard, you can be whatever you want to. Sadly, for those of us in real life, that's not quite how it works.

Getting a job is as simple as choosing a career path and Congratulations! You start the next day. The first few stages of promotion are pretty much as simple as not forgetting to turn up, later stages require improving skills. If you manage to get yourself fired, you simply apply for another job and start again the next day. This game subscribes wholesale to the American dream -- if you work hard, you can be whatever you want to. Sadly, for those of us in real life, that's not quite how it works. As the game isn't plugged in to a real world economy, businesses never have to close down, no one ever gets made redundant, item and house prices remain static, and continuous promotions and pay rises are pretty much guaranteed as long as you just go to work in a good mood.

To be fair, the Sims isn't meant to be TOO much like real life, and that's exactly why people play it. One of the first things I did when I bought the first game was to make Sims that resembled myself and a guy I had a huge crush on and had them fall in love and get married. In real life it would never have worked out, because in real life you don't get to just decide on someone and have them automatically fall in love with you. You don't get to pick a job like being a rock star or journalist and automatically rise to the top of that profession. It's escapism.

EA has continued the 'it's all about the money' theme into the real world -- online you can buy new outfits and furniture, but they don't come cheap (100 SimPoints is $1 and a furniture set can cost anything up to 2000 SimPoints). In previous games one of the things I really enjoyed was that I could design stuff myself and also download a wealth of user-generated content including clothes, people and furniture for my house for free.

In the first Sims game, this was actively encouraged, and there were official programs you could use to help you design stuff, check it for errors, and put it in the game. In the second game, the helper apps were notably absent, but designing things could still be done. With The Sims 3, you practically have to hack the game to get it to accept 'non-official' items and skins and designing them is really difficult. It's obvious that EA doesn't want us designing our own gear anymore, since that wouldn't make them any money.

Intimacy is all too easy and the real challenge is kept for acquiring a perfect set of posessions.

I found The Sims 3 to be something of a disappointment. After all, there's only so much (in-game item) shopping a girl can really enjoy. Once you've earned enough to design your dream pad and get your paws on all the mint gear, there's really not much to keep you playing.

I was all up for clandestine midnight relationships and covert affairs, but it turns out thats not really possible. Intimacy is all too easy and the real challenge is kept for acquiring a perfect set of posessions. If this was the first Sims game that I had ever played, I'm sure I would think it's absolutely brilliant -- but that's exactly the problem – in most of the ways that count, it IS the first Sims game that I played, just with a few tweaks, some new stuff, less customization options, and the option to design new things yourself taken out.

You can support Emma by buying The Sims 3