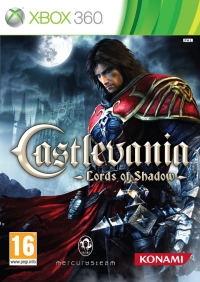 Other GamePeople columnists have reviewed this from their perspective - huh?:
Teen Gamer (PS3)
Returning Gamer (PS3) 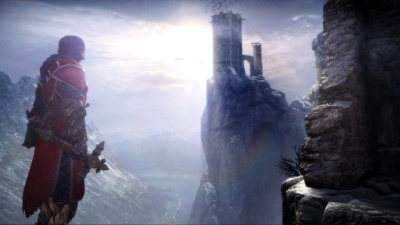 Castlevania: Lords of Shadow creates relationships with a sense of ambivalence. In a see of classic character traits and Greek types, if the intimacy on display here is intended, Capcom are to be roundly congratulated.

Konami have had a long run with Castlevania, ranging from dungeon crawlers and arcade style to brutal hack'n'slash adventures, and Castlevania: Lords of Shadow is certainly not something to be ashamed of.

But with the series' interchangeable characters and flexible plot line, two characters really stood out to me in their latest instalment. Gabriel Belmont, your tragic hero seeks revenge for the death of his beloved, a theme not uncommon in video games, but however stale Gabriel had something different that made him stand out. I wanted to look at Gabriel and the character of Laura, and their brief but touching relationship during the course of the game and what followed.

Gabriel Belmont suffered a silent torment, a quiet soul who lost the love of his life, and despite all of this his pain was almost unseen when he spoke to (or of) his deceased wife. His suffering leaked out through the narrative voice of Zobek, portraying his loss and pain through his sleepless nights and horrific nightmares.

Gabriel had become truly disillusioned, drifting between reality and dream. Laura in comparison is a vampire, a child, but I was not fooled by her looks. Rather, I thought she looked like a child just aching to be a woman. She reminded me of the sorrowful character of Claudia in Anne Rice's Vampire Chronicles.

Although at first she doesn't appear to have much in common (my original impression of Laura was no different to any of the other minor characters in the game) she quickly turned into something special, something sad and small.

She quickly turned into something special.

It was subtle, but it stayed with me even after I'd stopped playing. Her little face was able to show only contempt and a vampire's snarl: a foil to Gabriel's detached calm. Laura is described as a spoilt child, probably of royal decent but now a vampire. But there was more to her than even the creators seemed to realise, or maybe were reluctant to reveal.

Gabriel and Laura's meeting was only the most fleeting of relationship, it was an imitation of one. Here were two broken and tortured souls, tormented and lonely, who had happened to be in the same place and happened to find one another. Despite their brief encounter during the game, I was never able to really decide whether this was romantic or plutonic. Like Bob Harris and Charlotte in Lost in Translation even with the age gap and Laura's childlike qualities, their bond seemed like something more, they were two of a kind. Their pairing hovered between father and daughter and two lovers in an unsettling way. They were more than kindred spirits, perhaps more truthfully: victims of fate.

Laura is all that Gabriel has left by the end of the game. He spared her, and it seemed that she is all that he has that ties him to his past. She is surprisingly important to the plot although at first this is hidden.

This strange intimacy made the whole experience of playing feel fresh and intriguing.

It was only when I played the downloadable content that I realised the full extent of Laura's influence on Gabriel, and in the end how she was the reason for his condition in the final cut-scene of the game.

Throughout the game Laura is an enigma, and totally misunderstood. Maybe downplaying her importance was a subtle stroke of genius or maybe simply an oversight -- but either way (despite how briefly she appears in the game) Laura and her treatment by Gabriel Belmont seem the pivotal point around which the game turns.

This strange intimacy, that is happily never pinned down (again like Lost in Translation), made the whole experience of playing feel fresh and intriguing -- meaningful even.


You can support Emma by buying Castlevania: Lords of Shadow