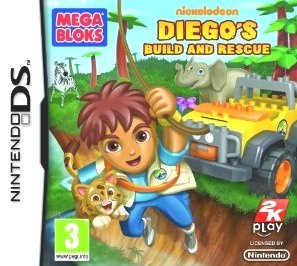 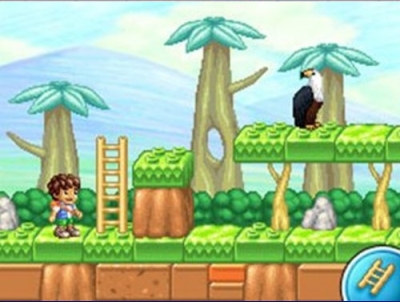 Diego's Build and Rescue finally brings the DS games up to par with the Wii Diego and Dora games. Simple platform controls and Mega Blok building made this ideal for the Junior gamers in our family. Here's what they made of it...

I'm a bit old for Diego and Dora but I still like to watch it with my little brother. When I do it reminds me of when I was really little, and I like that.

I've played the old Diego Dinosaur (DS) and Dora Princess (DS) games, but they were not as good as the ones on the Wii. They just had lots of little short games rather than big levels to explore.

The Dora Puppy game was a little bit more fun, but it was also hard work looking after all the animals.

Diego's Build and Rescue is a DS game just like Diego Dinosaur (Wii). You explore big levels to find diffenent tokens and rescue animals. To do that you have to use the Backpack to slide down zip-wires and parachute of big jumps.

I liked controlling Diego with the D-pad buttons on the DS, but when my little brother played he found it much easier to just use the stylus. Like on the Wii when you just tilt the controller to move, the touch screen makes running around with Diego a lot easier. Just press in the direction you want to go and he runs that way.

Jumping is easier to because using the stylus you don't have to line it up exactly, just tap once and the game jumps you to the right place.

I'm glad the Diego DS games have got as good as the platform games on the Wii.

Diego finds lots of different Mega Blocks on each level. Some of these build things straight away while others are collected to build big vehicles. You build submarines, cars and snow mobiles.

Bloks are also used to make ladders to get you up to high platforms and bridges to get across gaps. It's a bit like the Lego (DS) games when you are building things like this - apart from you have to move the blocks into position rather than just holding a button which I think is more fun.

I'm glad the Diego DS games have got as good as the platform games on the Wii. It was a little shorter I think than the Wii game, but maybe that's because we played it more often - like on car journeys.

I think anyone who likes running and jumping and building things would like this Diego's Build and Rescue Mega Blok game.

You can support Ben by buying Diego's Build and Rescue