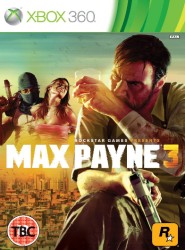 Other GamePeople columnists have reviewed this from their perspective - huh?:
Family Gamer (360)
Multiplayer Gamer (360)
Reporting Gamer (360) 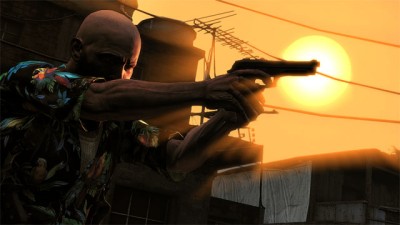 Max Payne 3 is about shooting people in the face. As much as Rockstar want to dress it up in smart suits and snazzy dialogue, I found myself pumping goons full of lead more than relating to anything that was going on around me.

Violence is now as much a part of videogame heritage as speedy hedgehogs and tubby plumbers, so it is unsurprising that I have become so desensitised to it. Comical, cartoon or over-the-top, it is common place, but Rockstar has decided to create a level of blood spilling so realistic and well coded that even seasoned veterans will grimace as another fleshy chunk of skull-pulp whizzes past the camera.

I've never been a gore junky. Story and character are more important than shocks and splats. Max is older and more grizzled than before. His situation is dire and he exists in a world of hatred and greed. Throughout the game his exacerbated sighs cry out for a break from all the killing, but deep down we suspect that without the war his purpose would have left him and he would fade away. Sadly, this violence is essential to him the same way it is essential to videogames.

I remember the original Max Payne as a nine hour long homage to adult graphic novels and the Matrix. I thought the narrative was cheap and immature and the violence became repetitive very quickly. Rockstar have become the king of transforming franchises from uncut diamonds to sparkling gems and, as I've matured along with the company, I had hoped for more than b-movie one liners and blazing gunplay here.

Hesitancy is something I can relate to.

The gameplay is unchanged from the series starting point. Flipping, rolling and shooting take up the majority of the time with the later levels requiring the thoughtfulness of mind for you to hide behind cover and rattle off shots every now and then all to the tune of slowed down squelching.

It would be unfair to imagine a game which eschews violence altogether; after all, Max is a man of limited thought and uncouth action, but I found myself waiting for the muzzle flash to stop and the superbly directed cut scenes to kick in. Max lumbers around his new Sao Paulo home with the grace of a fatheaded tourist. He is no longer sharp, no longer young. His veins are full of wisdom and painkillers and his oaky body heaves against cover while bullets snap past his ears and dust his jacket with plaster of Paris.

Hesitancy is something I can relate to. Needing to assess a situation before shooting gives you the peace of mind that comes with careful planning. It could be argued that Payne should not be snapping to cover and popping off shots. The impertinence of youth is the first thing worth shedding if you want to make it past thirty and Max seems like the kind of guy who should start thinking about the future -- it's not as painful as thinking about the past.

Producer Dan Houser has made his game precisely how he sees fit and I appreciate that. Without question Max Payne 3 is my favourite of the trilogy. It's smart and fun and just verging on the clumsy side of thoughtful. Mixing new with old is a difficult balancing act but nut not as difficult as making a well rounded videogame.

Like Max, I'm hesitant about giving myself to all this blood letting.

But I can't escape my starting complaint - the violence. Max's world is one of drugs, vice, booze and bullets; his story will only ever be told over the bodies of a thousand bad guys, I've had enough of it. It comes as a breath of fresh air when the main input I have in a game is not pressing the right bumper to pull the trigger.

Like Max, I'm hesitant about giving myself to all this blood letting. Unlike Max, I can't seem to get past my moral foiballs. I've shed my youthful exuberance and with it my penchant for unending, uninhibited violence. In the same way as my choice in both film and music has mellowed I crave more thoughtfulness. Max Payne 3 was sold as if it was the game for the maturing gamer, when in fact it's the same old shooting gallery.

You can support Richard by buying Max Payne 3