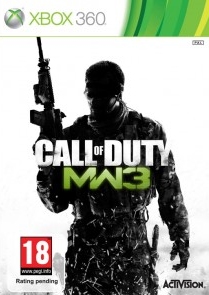 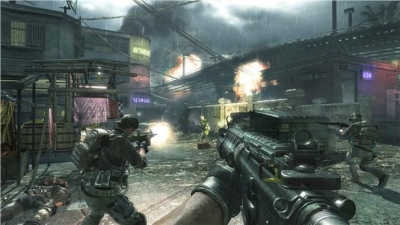 Modern Warfare 3 isn't a bad game, it's just a bit boring. Maybe I'm getting old but I've less and less enthusiasm for the virtual violence and online abuse these days. Maybe it's time to leave this all behind.

It strikes me as odd that the Call of Duty franchise has become the one of the most prestigious and financially successful brands in the history of videogames. There is so little to distinguish it from a multitude of other long running series, there's no main character to plaster over billboards and no major additions from title to title to generate such a fevered consumer interest. The franchise has more in common with a sports game like FIFA or Madden NFL; I imagine pretty soon they'll give up giving the games suffixes and just call it Call of Duty 2012.

Despite all this and a bucket load of my better judgement I found myself queuing up in Tesco at 11:30pm the day before release so I could be one of the Lucky few able to play the game long into the cold November night. I was with two of my rather more coercive co-workers and surrounded by a who's who of dodgy looking characters that were highly likely to dismember me on the multiplayer later that evening.

I was swept up in the moment and realised being this excited by games is now a distant memory -- a worrying thought for me. Did I really go to this launch hoping I would find the pangs of excitement I used to have when I was a child?

In reality, queuing up in that godless superstore made me neither excited nor happy, but bored and slightly ashamed.

To be honest, different things make me excited these days. I am far more excited by the prospect of a pub crawl with my old college friends. This made me think about the level of dedication younger players can bestow upon big games such as Modern Warfare 3. We've all heard them over the voice chat. I was never really like that when I was their age, gaming was a more insular activity, and my juvenile language was reserved for only myself and my bedroom walls, not the rest of the world.

The more I play Modern Warfare 3 the more disenchanted I feel about the industry.

Despite their vulgarity, in fifteen years time they'll fondly recollect that time they PWND some NOOB on Modern Warfare 3 with an anti-personnel mine and a liberal helping of tea-bagging. Although this terrifying vision of the future is not ideal, it is unashamedly akin to old gamers bleating on about how sad they were when Aeris died.

I've played Modern Warfare 3 a lot now and it's actually quite a good game; much better paced than many of the other Call of Duty titles and with a satisfying ending. It's neither original nor massively progressive, but as a standalone piece of software it's good.

The problem is, the more I play games like Modern Warfare 3 the more disenchanted I feel about the industry. It's not just the shock of the violence but that this is where all the youthful excitement is focused. Although they aren't old enough to purchase the game, the children handing me a liberal drubbing in the multiplayer have all been exposed to it. It's a part of the industry that shames itself as it struggles to both fully understand the situation and subsequently deal with it.

I don't get excited about games any more.

I'm sure I was never as angry or tense a few years ago. It's tempting to think that it is the games that have changed, but in truth it is me. I thought I'd never say it but I can really see why more of my friends are disconnecting their consoles from the Internet, or just playing LAN matches at home.

As I head into older years I wonder if I'll be able to bring my gaming hobby with me, and that makes me sad. The stress of Modern Warfare's expletive rich online mode is not an emotion I want from my gaming any more. I have enough stress keeping me awake at night between my job and my finances let alone having to worry about what some berk called me over the PSN.

Maybe that is the reason I don't get excited about these sorts of games any more.

You can support Richard by buying Modern Warfare 3