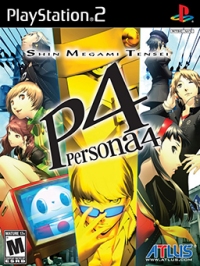 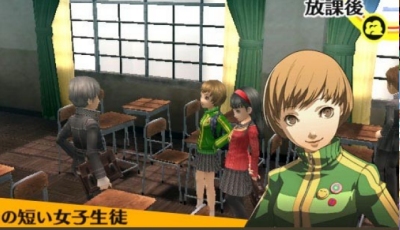 Persona 4 PS3 captures the wonder of wasted youth. Spending time in the quaint Japanese town of Inaba has reignited my love for both JRPGs and oblique Japanese colloquialism.

The steady grinding gameplay of Japanese RPGs has always made me feel very comfortable. I control the pace and difficulty by forcefully increasing the statistics of my characters. Gametime can run into the hundreds of hours (Dragon Quest VIII holding the record for me with 169 hours played) and the majority of this time is spent dungeon crawling and stat boosting.

More recently however if I had 169 spare hours I’d build a classic car or learn to play the clarinet. It’s a moot point as unfortunately I don’t have that sort of time. Out of necessity I’ve become used to the idea of shorter, more concise RPG’s. This was when I met Persona 4, a Japanese RPG with a time limit built in.

Persona 4’s premise is simple. Your character, a grey haired silent protagonist, arrives in a quaint Japanese town (Inaba) that has been blighted by a series of unusual murders. You and your gang of friends have exactly one year to solve the mystery before you go back home. After a while the narrative takes a macabre twist and you are introduced to a nightmare world that exists behind the TV screen and threatens the sanity of anyone foolish enough to enter.

It is in the halls of this bizarre netherworld that the components of a traditional RPG come together. Random battles impede progress, treasure chests contain hidden items, and bosses appear at the end of each and every cavernous dungeon to test your abilities.

However, it is in the regular world where the real magic happens. Your combative competency is bolstered by the activities you partake in and the relationships you nurture during your time in Inaba. This means you can focus on separate attributes in a variety of ways, curtailing the need for endless level grinding.

It is in the regular world where the real magic happens.

Initially I was drawn to the mysterious TV realm as it is usually here that you find the meat of a game like this. After endless button mashing, I began to explore the town and understand the ebb and flow of the game. I came to realise that the substance of Persona 4 was not in its traditional combat system and sci-fi aesthetic, but amongst the rain drenched rooftops of Japanese rural life courtesy of Inaba and her inhabitants.

The precisely detailed architecture and ambiance of the different districts feels like it’s been lifted straight from the celluloid of a Yasujiro Ozu melodrama or an early Takashi Kitano comedy. The cobbled streets and compact shops have a strange feel that rekindled my fascination for Japanese culture.

When I was a teen, having found Americanised fiction not for me, I turned to Japan and began to consume as much culture and media as was possible in those pre-internet days. Slowly, my interest in the East waned, most likely from its over saturation and watered-down exportation in games and films of the time.

I relished the slow hustle of school corridors and the awkward relationships.

Persona 4 reminded me of that seed of fascination. Much like the inclusion of the random battles I relished the slow hustle of school corridors and the awkward relationships between students. Persona 4 managed to marry the traditional with the innovative and wrapped it all up with an intimate and well observed visual design.

As you can tell, Persona 4 was a personal experience that made me feel great about gaming again. I play games for a variety of different reasons these days and being surprised, engaged and not losing too many hours rate higher than they used to. Persona 4 is a glorious game that did all this. It captured both my fond memories while shirking the usual role play game tropes, not many games can claim that.

You can support Richard by buying Shin Megami Tensei: Persona 4