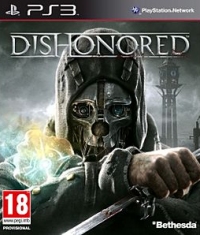 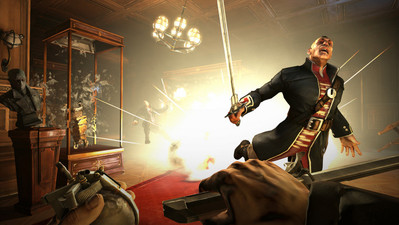 Morality and conscience are two vital attributes we must learn to abide by, but somehow Dishonored destroyed my sense of right and wrong in one fell swoop.

You play Dishonored in Dunwall, a captivating place. Set somewhere between an Imperialistic, turn-of-the-century Britain and a dystopian, Steampunk nightmare, its dank crevices and plush, bourgeois parlors are a joy to skulk around.

The city creates its own mythology and exists in its own twisted set of ideals. These are subtly presented in the thousands of conversations overheard on its streets and the extracts read in its libraries. Dunwall is unapologetic about its existence, imperative to the unsettling confidence of this game.

The city sits at the heart of the narrative. Although its denizens float around and fall into a mumble of trite dialogue and stereotypes, the city remains fresh and vibrant -- muted in pallet but dripping in atmosphere. More than anything I found it a place worth investing my time in.

Dishonoured is split into nine levels, occasionally these areas are vast sandboxes that funnel you forward but how you traverse them is pretty much up to you. It left me facing a very familiar decision, the option of stealth over brutality. The latter was a natural fit for me though and handsomely rewarded in the game.

As I silently progressed through the missions I steered my character's development towards the deft touch and softly-softly approach. By the end, I was barely visible. I was a shadow in a world of gore and hate. Not only was I utilising my sneaking, I had also decided to kill as little as possible; a decision which, as I had been trained to expect, was rewarded with a safer game world.

The city creates its own mythology and exists in its own twisted set of ideals.

I appreciated the effort Arkane Studios had put into this side of the game. I especially enjoyed the fluidity of movement best highlighted by some of Corvo's more kinetic abilities. Zipping around the map and slowly immobilising guards was a pleasure and the silence it brought felt like a reward.

Despite this clarity of action, I still felt under whelmed. I was reminded of Bioshock and Deus Ex: Human Revolution as well as Beyond Good and Evil's approach to storytelling and pacing. But here there was something missing, some spark of life maybe, or the thrill of exhileration.

I know that Dishonored is roundly praised for its approach to narrative and visual design, but in pacifist stealth mode it all felt a little muted. I decided to play the game again, with less worthy aspirations. I became a killer. I was slow, cumbersome and brutal. I called forth tidal waves of rats and blasted holes in my opponents. I slowly fell in love with setting traps for unsuspecting guards and not chastising myself when they were alerted to my attentions. I resorted to sticky grenades, spring razors and scything blasts of wind. I was a killer, and it felt great.

When I was stealthy I felt I was connecting with the game in a way that would please the developer. I enjoyed my hidden experience but it was the opportunity to challenge my sense of right and wrong that brought Dishonored to life.

Like the uncoiling of a spring, my second more destructive adventure was a great release and the cacophony of violence which resulted from my lack of inhibitions was a tipping point for me. I've never bought into the idea that you can affect the outcome of events through your actions in videogames in a truly organic way. Games are coded within boundaries and what ever I do, I'll fall somewhere within these boundaries. What Dishonored allowed me to do, however, was remove some of my own restrictions regarding morality.

Like the uncoiling of a spring, my second more destructive adventure was a great release.

Maybe it's just that games still haven't found a way to make non-violence enjoyable or maybe its something about me that relishes the excitement of doing something I wouldn't find morally acceptable in real life. Either way Dishonored got under my skin and made me rethink my sense of right and wrong.

Doing the right thing in a game is usually all you can do; Sonic the Hedgehog never had to face a crisis of morality on his quest to kill Dr Robotnic, but these were simpler times. Now, it seems, games answer to the higher calling of interactive entertainment, and decision making -- not to mention dealing with the consequences of decision making -- is a big part of that.

Losing my inhibitions about right and wrong was a great feeling, and, while the endless slaughter did grow tiresome, the initial destruction of my moral compass was a welcome change to my usual "by the books" approach.

You can support Richard by buying Dishonored