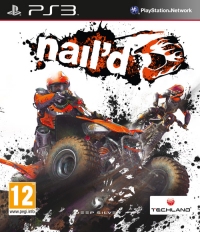 Other GamePeople columnists have reviewed this from their perspective - huh?:
Tired Gamer (PS3) 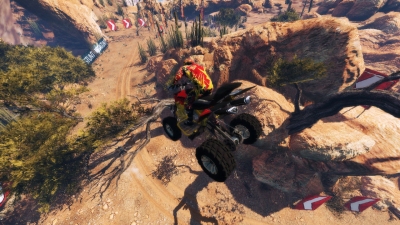 Nail'd combines the excitement of extreme Motorsport with the rebellious nature of youth. Sounds like my kind of game, but in practice is anything but.

Nail'd is horrible. It's like 30 year-old skateboarders who use the word "rad" and spend more money on their "deck" than on their child support. I can't abide forced attitude and faux charm and Nail'd has it in spades.

Even the grammatically atrocious title makes me cringe. You may think I'm being hard on something not aimed at me, and you'd probably be right; but the lack of maturity and imitation-cool presses all the wrong buttons for me.

Nail'd is an extreme sports racing game in which you barrel down geographically impossible tracks at implausible speeds. You are limited to either a Motorbike or an ATX (Ed: Automatic Transmission? I think you mean Quad Bike.), but both feel identical so favouring one over the other is purely a cosmetic choice.

The campaign mode is structured in a way that allows you to progress without having to win each individual race. This is important as the difficulty spikes come at seemingly random intervals forcing you to complete other races in the hope of improving your ride through the rudimentary vehicle customisation tools. These amendments again feel more cosmetic than functional as they make little difference to the skittish behaviour of your bike.

Handling is light and floaty and every track can be completed without touching the breaks. Vehicles zip along without as if they were hovering on a cushion of air, bouncing off scenery and seemingly impervious to the perils of gravity. The competition is neither realistic nor aggressive and challenge only comes later as they are gifted faster vehicles which feels grossly unfair.

Progression in Nail'd is cumbersome and unrewarding and the online lobbies are a ghost town. Put bluntly, Nail'd is broken, ugly and a dog to play. But this isn't why I hated it. Many of the game's faults could be excused if it genuinely embraced its heart-on-sleeve youthful outlook.

Perhaps I just long to relive my carefree teenage days

I like teenagers. I liked being a teenager and I like being around them now. I saw my teenage years as a last hurrah for my devilish juvenile shenanigans and I enjoy watching others struggle with the huge encumbrance of responsibility adult life brings. It may sound callous, but the results are usually fun to be around.

Nail'd wants to be a game by teenagers for teenagers -- it's unfortunate focus on style over substance is testament to that. I found it amusing that the male riders in Nail'd wore rather sensible leathers and body armour, whilst the girls were stuck with bikini tops and precious little else. I also found it odd that the game punished you so heavily for slightly veering off the beaten track forcing a quick restart after a short wait. Penalizing me for going off road in an off road game grates against the relaxed ‘whatever' attitude Nail'd wants to put across.

Perhaps I just long to relive my carefree teenage days so much that I don't like seeing their memory sullied by games that attempt an attitude of teenage dissatisfaction. It may simply be a case of looking back with rose tinted glasses, but I remember playing games in my youth that embraced the sense of rebellious anger that I was feeling.

Being a teenager and branching out into the world was a terrifying prospect. I played games to give me something familiar to hold onto -- something safe. When I play Nail'd I feel like I'm pretending to be a rebel, and that is simply something that is not worth the time of day. Had Nail'd understood authenticity it would have been a better game, or maybe not been released for fear of embarrassment.

I don't have the time or patience for games like Nail'd anymore.

I don't have the time or patience for games like Nail'd anymore. I wouldn't have been too bothered about it when I was younger and time was less of an issue. Now however, wasting my game time is a sacrilege I won't tolerate! I don't mind games having an adolescent friendly veneer as long as a high standard of gameplay has been included in the package.

I can usually forgive a game for its misgivings if its heart is in the right place or, at the very least, its good fun. I feel stupid for playing Nail'd. The whole experienced was forced and left a bitter taste in my mouth, and I hope it's something I won't have to repeat.

It sounds odd, but how often do we reflect on what we have learned from the videogames we didn't like? I am spending less and less times on games now, so it's imperative that I get wiser in my game selection. If that means leaving games like Nail'd behind, then I'm in.

You can support Richard by buying Nail'd