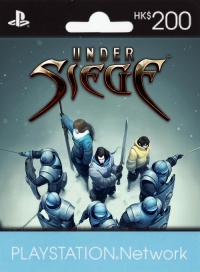 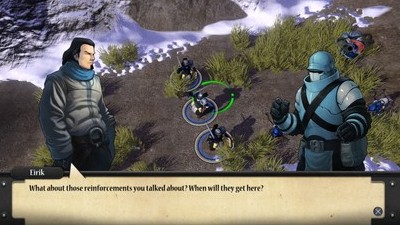 Picking up a control pad should be a moment to cherish and look forward to, but Under Siege's complicated button map and monotonous presentation sends my mind wandering to different, more domesticated pastures.

There's something so bland about Under Siege that I have developed a sickly dread when I attempt to play it. I sit at my console with a mug of tea and a plate of biscuits prepared for a pleasant evening of gaming only for my mind to wander in search of something else to do; even clean the kitchen. As I meander from level to level desperately in search of some form of enjoyment I slowly come to realise that the best part of Under Siege is that my procrastinations mean I now have the cleanest house in the country.

Under Siege is a real time strategy game like Command and Conquer or Cannon Fodder but with a twisted fantasy edge. A thick fog is rolling over the land and you are tasked with defending your country from the invading armies who reside within the murk.

I'm happy to lower my estimations for a download only game, but was surprised by the lack of polish here. Characters are flat stereotypes that reside in an unimaginative kingdom and fight insipid monsters. Conceptually the game falls short of any sort of design high watermark I've seen even in the last ten years. The narrative is delivered in JRPG style text boxes and is so generically simple I found myself aching to hit the skip button and get on with the action.

Initially, I was hoping for some deep tactical play with flanking manoeuvres and constructing a sturdy phalanx against the oncoming hordes of enemy ranks. That was until I realised the average unit size was constructed of three men.

Just what my gaming preference has become.

Although the combat is on a much smaller scale than many real time strategy games it is tight and for the most part fair. Units all seem to have a purpose and real thought needs to go into the placement and preparation of troops if you want to get past the first few levels.

Under Siege just about manages a control system that lets you order units via the joypad, although the micro management for some of the later levels means that memorisation of button combinations is the only way forward. The PlayStation Move peripherals can be used but I imagine this would render the game impossible and make me look rather silly.

Maybe my unwillingness to learn is not so much a negative mark on Under Siege, but just what my gaming preference has become. I'm ok with this though, for me gaming isn't about overcoming adversity; it's about enjoying some alone time away from the rigors of modern life.

Under Siege is the kind of game that needs a fanatical following around it. It features a level editor which shows the developers had aspirations of creating this community. Community gaming is not really something I aspire to having. I already have a community of friends and I'd much rather go to the pub with them than sit in the dark and discuss unit types with some bloke I've never met.

I have found pleasure in grazing over games.

Although I am at an age where playing games has become more difficult, I have found pleasure in grazing over games and not being too concerned with having to squeeze every last drop of enjoyment out of them. The main problem I have with Under Siege is that I wasn't engaged by any part of it. I find I can stomach even the most tasteless and boorish games if it contains at least some character or individuality about it but I found Under Siege to be as plain as paper.

I would certainly say that I have become pickier with the games I choose to play. My time is precious now and I need to utilize it the best I can, so when I play a game I need to feel like I have gained something from it. I have taken nothing away from my time with Under Siege.

You can support Richard by buying Under Siege