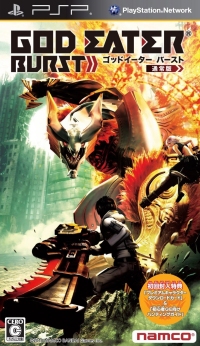 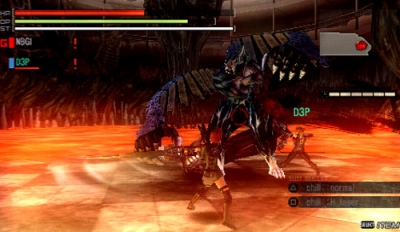 Gods Eater Burst PSP is a simple game, in the same family as the Monster Hunter franchise and with a strong emphasis on repetition, familiarity and grinding. Its tedious tempo has become a metronome for my downtime.

Many will find Gods Eater Burst's repetition too much to bear. However, although the thought of endlessly replaying the same level to acquire rare items doesn't exactly fill me with joy, its methodical narrative and rhythmic pacing can be just the thing I need to forget a tough day at the office.

You begin by being assigned to an elite squad of god killers named Fenrir. As you advance you meet up with a whole host of manga-tinged archetypes you'd do well to steer clear of in the real world; the moody grey-haired teenager, the sexually obtuse yet provocatively dressed mother figure and the feisty pumped-up German with crippling anxiety attacks and a wealth of unresolved father issues.

With your motley crew assembled you head out into self enclosed maps to decimate and devour pre-selected enemy types. How do you do this? With enormous swords that change into guns that change into shields that have the power to eat your aggressor of course.

Put bluntly, Gods Eater Burst is a little silly. An exceptionally trite script and gloriously camp voice acting do create a "so bad it's good" sort of feel, but ultimately it's all a little bit too daft to take seriously.

Having giggled my way though the cut scenes it becomes apparent that the lack of depth experienced with the narrative is mirrored by the gameplay. A central hub is used to select missions, purchase items and re-configure your gargantuan sword/gun/shield/mouth. Missions all revolve around the destruction of an increasingly deadly combination of enemy types, built around a common element that they are either susceptible too or empowered by. The combative aspect present in Gods Eater Burst is split between popping off rounds from a distance to alert your foe and then hacking away at weak spots until they hit the dirt.

Its tedious tempo has become a metronome for my downtime.

With your mark defeated it's time to for your sword to harvest all the bits and bobs needed for the next weapon upgrade. This may take more than one attempt as most improvements require around a dozen different items from the same enemy type. Latter on in the game, progress becomes impossible without serious grinding and undertaking the mindset of a clinically disturbed hoarder.

As you disembowel the same meandering goliath for the umpteenth time it becomes apparent that Gods Eater Burst isn't very good. It looks bland and plays far too simplistically for tactics to make a difference. A bullet creation database attempts to give a sense of depth to the proceedings, but the awkward camera and sluggish aiming controls means far more damage can be dealt with a well constructed sword.

This all sounds fairly conclusive. But the more I've played it the more I realised how good a match it is to my time pressured days. I can honestly say, and I don't say these words lightly, that I love Gods Eater Burst, and I never ever want it to end.

As I've played the game a sort of pattern has appeared in my life, a routine that helps me wash away the toil and stress of a modern existence. Accompanied by a pot of peppermint tea and a screening of whatever Film Four have deemed appropriate for that evening, I have found no greater comfort than trawling though the banality found in Gods Eater Burst.

It is the gaming equivalent to whale song and scented candles.

This ritualistic approach to gaming is not attainable with any old game, but Gods Eater Burst fits the bill perfectly. It features no highs or lows, it progresses at an ambling pace, I have no emotional investment in it and, most importantly, it offers no challenge that has to be overcome with any level of skill whatsoever. It is the gaming equivalent to whale song and scented candles.

The only obstacle between me and completion is about half a year's worth of button mashing and collecting items; wonderfully, the end of my day is the perfect time to do this.

I have very personal reasons for liking Gods Eater Burst, and the conditions for my enjoyment to be resolute are quite particular. To be perfectly honest, I wouldn't play the game if I couldn't do other things at the same time, even if they are as basic as watching a film.

Gods Eater Burst isn't as much a game as it is a tool for unwinding. I look forward to my downtime even more now that I have it in my life, and I've noticed that I've played it almost every day since I first got my hands on it. I would never suggest that Gods Eater Burst is a game worth playing, but it has become as essential to my daily routine as brushing my teeth or whinging about my boss; and just like those daily activities, I don't plan on giving it up any time soon.

You can support Richard by buying Gods Eater Burst