Other GamePeople columnists have reviewed this from their perspective - huh?:
Family Gamer (PSP)
Returning Gamer (PSP) 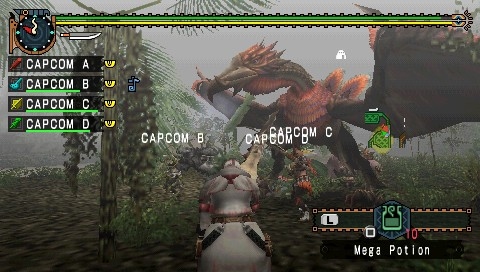 Monster Hunter Freedom Unite's limitless depth pairs it with extremists, gluttons for punishment and obsessive compulsives. Perfect for a teenage me, but I don't think another addictive collect em' up is what my life needs at the moment.

Monster Hunter is an obsession for those it can ensnare. First released in 2004 on the PlayStation 2, the franchise's popularity grew to an almost religious status in Japan, and won a dedicated cult following in the West. Freedom Unite is the series' third outing on the PSP and, as I loaded the disk into my console, I waiting for the clouds to part and to be whisked away on a wave of euphoric pleasure.

The pleasure never came; instead I was greeted with drab menus, item lists and a camera whose main aim was to scupper my attempts at success at every given opportunity.

Monster Hunter Freedom Unite seems content with keeping plot to a bare minimum. Without any great introduction your character is placed in a small village and expected to intrepidly step out into the wilderness to kill or capture the local wildlife. Initially, this is not particularly arduous, and you'll find that carving up various animals and stitching their hinds together to make a nifty pair of boots is quite easy. But five hours in you'll hit the wall as missions become utterly insurmountably.

Grinding is the key to success in Monster Hunter Freedom Unite. Harvesting animal parts for the next item upgrade is both frustrating and demoralizing and rarely yields the desired result. The game is segregated into two distinct halves - preparation and undertaking. Outfitting your character with the correct equipment and items is just as important as setting out into the field and gutting your prey with a freshly crafted long-knife. The problem is, neither part is much fun unless you are desperate to spend your waking hours in pursuit of a virtual quarry.

If knowing yourself better is part of growing up, I don't enjoy this sort of game anymore.

Combat is belligerently tricky, and with eleven weapon types it's difficult to become rounded enough to give you a varied approach when faced with different enemies. Sadly, even when you do manage to master a particular weapon the lack of a lock-on function will hamper your progress no end. Combat problems can be alleviated by the four-player local co-op mode, but finding four friends with a PSP let alone a copy of this game may prove tricky.

The absence of a plot is mainly to blame for my hesitance to progress. The only reward to be granted upon the completion of a challenge is some odds and ends that can be crafted into a new hat and a more powerful foe with which to become dispirited with. Be that as it may, a game should be its own reward but ultimately Monster Hunter Freedom Unite doesn't fare too well that respect.

Monster Hunter Freedom Unite was meant to span hundreds and hundreds of hours repetitiously covering the same ground looking for materials and objects but I just couldn't care less.

It's not unlike Gods Eater Burst. Both games play in a very similar fashion, but where Burst more relaxed approach to progress gaming was inviting to someone of increasingly limited playtime, Monster Hunter Freedom Unite is an assault on my nervous system that is destined to cause more chewed nails and grey hairs than I can afford.

In many ways Monster Hunter Freedom Unite's main problem is its greatest selling point. The infinite depth created by its weapon customisation will stimulate those who can lose themselves to the challenge. Sadly, this just isn't me anymore.

It's actually a happy relief to realise that I don't look forward to playing Monster Hunter.

Monster Hunter Freedom Unite is pure one-upmanship. It's the digital equivalent to keeping up with the Jones's, and I've become far too old for that. I may sound like I no longer want to give difficult games a go but this is not the case. A rewarding challenge and hair-pulling frustration are two very different things, and Monster Hunter Freedom Unite only provides the latter for me.

If knowing yourself better is part of growing up, then I'm happy to realise that I don't enjoy this sort of game anymore. It used to worry me that games wouldn't be as big a part of my adult life, but the reality is that I'm comfortable being more picky now.

It's actually a happy relief to realise that I don't look forward to playing Monster Hunter. I can't warrant the amount of time and tears it takes to become good at it. I don't feel relaxed or entertained whilst playing it. I'll leave this to other (more juvenile) gamers and simply walk away.

Monster Hunter Freedom Unite represents a style of gaming I starting to give up. The fanaticism is well deserved, but it is not something I want to be a part of any more.

You can support Richard by buying Monster Hunter Freedom Unite