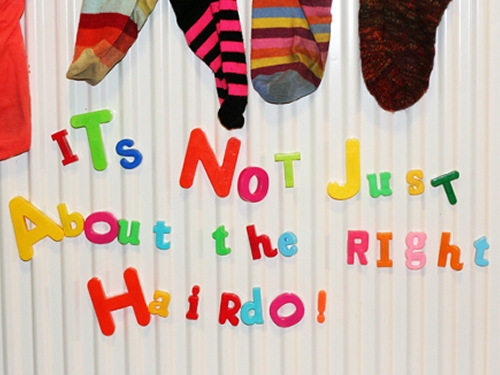 It's not just about getting the right hair do.

Due to the fact I am not quite rock and roll when it comes to my musical career, I have always been ok with my kids growing up around it. they are inquisitive to say the least and ask me all manner of questions whether it be, how to get a CD pressed, to getting music on the radio, to managing royalties and licensing. So this game was an interesting way for my three seven year-olds to try out a musical career from the safety of our living room.

The first thing I liked about it is the multiple save game files. This allows each of my three to have their own save game and take turns in playing it. The game itself it pretty well pitched and has for the most part been autonomous, but I couldn't help get involved when they started talking about their appearance. To any other eavesdropper you might of thought you were listening to several late-teens preparing for a night out making sure that the outfit they were designing coordinated properly, but these were three 7 year-olds making their way through a DS game.

Kids absolutely loved the idea of having sixteen outfits to modify and wear.

Imagine: Music Festival is based around a girl at a musical summer camp, with three types of music rock, pop and punk, and three instruments drums, guitar and keyboard, playing well unlocks new songs to play and cash to update your ever-changing wardrobe. The wardrobe and theme of appearance does tend to both feature heavily in the game with a lot of of the game areas linking back to the wardrobe. I don't think this is a major stumbling block for the game, however for me as an adult the idea of being able to customise an outfit was lost, but kids absolutely loved the idea of having sixteen outfits to modify and wear. Interestingly it did lead back into several conversations about being a musician and things like appearance and what type of appearance (in their mind) meant what. It eventually lead into looking at different fashions in popular culture and music from 1960's onwards, stopping for awhile to marvel at the big rock hair of the 80's.

Kids absolutely loved the idea of having sixteen outfits to modify and wear.

The main problem I had with the game was the music itself, not the songs but the timing of the musical games that went along with it, to me they felt a little out of time and maybe even thrown together at the last minute. It's really hard to say it and I hate to say it but the game is gendered, even though my boy did play on it and enjoyed it, he tired of it much quicker than the two girls, who discussed their outfits at great length outside of playing the game and are still very much interested in progressing on it. There is also the slightly repetitive task of maintaining the friendship between the different camps pop, punk and rock, so you have to repeatedly visit them to see how they are.

This isn't a music game. It's more like an adventure game with music being one of the many themes. It failed for me as an adult player, but it succeeded in thoroughly entertaining the children.

You can support Matthew by buying Imagine: Music Festival