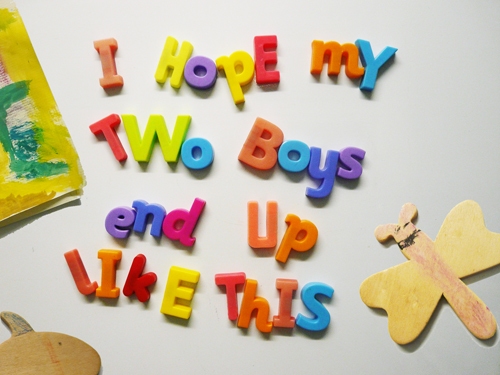 I hope our two boys end up like this.

After a day spent with my seven year old son, teaching him basic electronics and planning out a home-made pinball machine, it was both amusing and apt that we should sit down to play on Disney's Pheneas and Ferb that evening. Luckily you don't have to be a fan of the TV show to understand what's going on or enjoy playing the game - the back story and the catchphrases are all apparent in the tutorial level.

The story of the game amusingly paralleled that of me and my son, with the two protagonists finding new and amusing technological ways to amuse themselves over the course of the summer holiday. Each level is based around planning and building an amusement ride by rummaging through rubbish bins and crates to find the necessary components, sprawled over a pseudo 3D platform environment. The two characters each have their respective skills and can combine them to amusing effect such as climbing a ladder and balancing on a tightrope together. There are the usual gadgets to collect like running / jumping shoes but what is different is that due to the nature of the game you can upgrade them with the parts or scraps you find. After finding all the parts and plans, you then get to go on the ride itself, in race against the clock to unlock additional bonus items.

One of the most enjoyable features of the game is the absence of standard lives or energy bar, instead we have a not-so-villainous but amusing older sister Candace you have to keep calm by feeding her shortcake. The more the Pheneas and Ferb combine their skills and mess about to complete the levels the more the 'You're so busted' bar goes up. Instead of an instant 'Game Over' when it's full you are thrown into cat and mouse chase sub-game, where the two have to find all the screws before being caught by the older sister and handed over to the parents. If successful you simply go on your way and the You're so busted bar starts off empty again. If caught you simply repeat the maze game with less screws to find thus adjusting the game to the players ability, which is a really nice touch.

It's well worth it and a lot of fun, but I must warn you it may lead to some home-made go-kart building.

The second feature I like is that there are several sub-games, from building upgrades to finding characters hidden throughout the levels, but what is nicer is that full completion isn't necessary to complete the game, nor does it have any major effect on the outcome of it. Also there are several save places throughout the game, so the player doesn't have to complete an entire level before taking a break which is very useful, as despite the levels being short in number they are quite long in length.

The game is aimed at a younger audience and hits this market well - it is a simple cartoon based adventure with little sign of violence and even then it's slapstick and only happens once. However this isn't something the average seven year old could pick up and play right away on their own. I would recommend that you sit down with and complete at least the tutorial level together with them, it's well worth it and a lot of fun, but I must warn you it may lead to some home-made go-kart building.

You can support Matthew by buying Phineas and Ferb