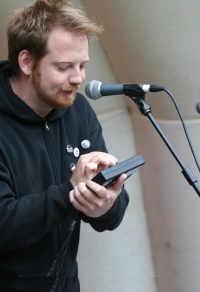 I dreamt of a marching samba band drumming their way through the streets - not with real drums, but with customised drumming DS's. I need your help to make this happen. And here's why.

I recently visited a school to teach kids who to make unusual electronic sounds. I had with me on the day, a circuit bent toy keyboard which I had added loads of extra features to and a Nintendo DS that I had reprogrammed to make into a real time music synthesizer.

At the end of my presentation I asked if the 8 year olds wanted to have a go on the instruments for themselves, they all jumped to their feet and lined up. But then they did something unexpected - instead of forming two lines, one in front of the keyboard and one in front of DS, they all chose the DS.

After a few students had played on the DS they were asked if "anyone wants to play on the keyboard?", "anyone?" eventually one of the girls near the front piped up "no, I don't because I don't know how to play a piano".

There was a cultural issue - embarrassment - about not being able to perform as a "proper" musician especially not in front of others. Paradoxically they were quite happy to make sounds and draw attention to themselves by playing on the Nintendo DS through a very loud PA system, because the Nintendo DS had no set cultural rules in terms of musical performance.

These students at the age of eight were making a cultural distinction that keyboards are for formal traditional music and only trained performers should play in front of others whereas the Nintendo DS was for fun with none of these set musical performance rules.

At the age of eight they were making a cultural distinction that keyboards are for formal traditional music and only trained performers should play.

This was something of a watershed to me. Prior to this my primary focus was to make musical instruments and music, but this got me thinking, could I make software to help kids get involved in making music?

The software interaction needed to be as simple - maybe just a drum utilising the touch screen of a Nintendo DS as the drum head. The software needed to promote group music performance - maybe I could emulate samba music which allowed the music to be individually simplistic and collectively complex. And I knew the creation needed to be recognizable as the familiar and friendly DS.

It started to take shape. Each person was responsible for performing only one type of drum sound amongst a wider group of four with the same sound. It helped mask mistakes from the musical novice and provided them with the opportunity to learn from another.

The software was visually bright and 8-bit, and its layout was similar to the now generic Music Sims Donkey Konga, Guitar Hero and Rock Band and my personal favourite Parrapa The Rappa. But instead of mimicking the music the aim was to have the participants perform note for note, in this case beat for beat.

But I realised that one thing was missing from the 'performance', we were static, Samba bands should march - you should hear them coming.

It all came together the first time at FACT a multimedia arts facility in Liverpool, with twenty participants ten adults and there accompanying adults. The workshop was a success, for many it was the first time parents and children were performing cooperatively using a gaming console.

One of the parents liked the fact the could learn something with their child and the aim wasn't to compete with each other but to work together for the best performance. I am truly grateful for FACT for hosting the event as part of their Space Invader exhibition and good fun was had by all.

But I realised that one thing was missing from the 'performance', we were static, Samba bands should march - you should hear them coming. I thought back to a time when I went Microbusking (Youtube) - performing music on my Nintendo DS through little portable amp in a subway - I used this little Marshall MS-4 Microamp.

To get us mobile I decided to give Marshall Amplification a call and they were brilliant, they liked the idea and decided to sponsor it, they sent me twenty five MS-4 Microamps the next day. We were mobile. Thank you Marshall.

And today, I want to take the research further and get more people involved. I want kids who are confident in gaming to be able to transfer those skills into other activities, but I am only one man. The first workshop was great because everyone had their own Nintendo DS but I want to take this to schools, neighbourhoods and after school clubs where the kids aren't so fortunate, where playing on a DS would be a luxury.

This is where I need your help, I need your half battered old Nintendo DS's. I already have two I use to perform live with but ideally I would have around thirty. That way I could show up with a box and we could just make music. They could be original DSs, DS lite or DSis, they could be new or used, they don't need cases or power supplies, they could look terrible but as long as they work I need them. We need them.

If have or know of anyone who might be able to help it would be greatly appreciated. If you are interested in getting involved send me an email at pixelh8@pixelh8.co.uk you can also read about the research too.

You can support Matthew by buying Marching Samba DS's