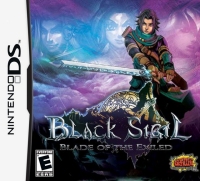 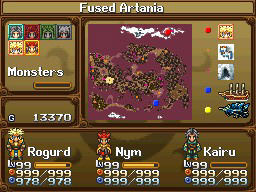 Black Sigil: Blade of the Exiled DS creates a detailed, interesting world, but suffers from too many tedious random battles. I suspect there is more to enjoy beneath the surface, but it quickly became too frustrating and tiresome to penetrate.

Black Sigil: Blade of the Exiled is a Canadian-developed but Japanese-styled role playing game. Fans of popular old-school role-playing games may well appreciate the clear influence of Final Fantasy VI and Chrono Trigger on the mechanical and graphical style. The plot of Black Sigil centres on spiky-haired protagonist Kairu, the adopted son of a Duke. Kairu suffers significant prejudice and fear from the people around him due to being born without magic.

Fictional societies where magic or supernatural powers are common often feature in fantasy games. It's often a world where more mundane characters are seen as inferior or undesirable. Even Harry Potter plays with the idea of the Wizarding community considering themselves superior to the rest of society, and see non-magical bloodlines as a bad omen.

In Black Sigil, I entered a microcosm where most people I met disliked my main character, and many wished him harm.

This prejudice can function as an allegory of real-world racism and possibly help people reconsider their own perceptions. In Black Sigil, I entered a microcosm where most people I met disliked my character, and many wished him harm. I encountered citizens who openly hoped he was going to fall to the monsters in the forest, even though that would mean increased risk to their own village.

Kairu takes this abuse quietly, and even makes apologies for it. He starts out more inclined to question himself than the negative perceptions of others. Meanwhile, the Duke does everything in his power to try and draw forth some magic from his adopted son.

It reminded me uncomfortably of the sorts of parents who believe that being gay is a choice, and demand their children express 'normal' sexuality. Kairu is pressured to change by almost everyone around him, rather than being accepted for who he is.

For all its tropic characters and themes, I considered the beginning to Black Sigil quite promising. Being openly despised made an interesting change from being a respected (or at least up-and-coming) hero. What really attracted me to the opening sections of Black Sigil, though, was the surprising amount of humour.

The Duke's castle is full of little hidden jokes and amusing characters. A book warns students to study hard, lest they become like the author who was forced to become the servant to a sheep. A knight-in-training playing cards with friends tries desperately to win his clothes back so he can leave the game table with some decency.

These are small but important details. This style of fantasy can become really hammy, and I think it helps when humour is used to avoid taking the world too seriously. I enjoy exploring the game for these little details, and increased my hope that this would at least be a game worth playing - though not one to expect much originality from.

Unfortunately though, things soon settled into a familiar grind. The random encounter frequency is higher than I expected and gets very tedious while trying to navigate maze-like dungeons and conserve resources. There is the option to run from combat by holding down the B button, but that isn't included in the game manual so I spent a lot of time unaware of that functionality. Running really can be the best option sometimes, and would have made a large difference to my early survival.

The combat in Black Sigil is turn-based, with action meters determining turn order. It's quite straightforward, but even on the highest battle speed involves some waiting around for action meters to recharge between turns. This artificially lengthens combat, which really wasn't necessary given the frequency of these random encounters.

I honestly wished I could just skip the fighting altogether and just explore the world.

I honestly wished I could just skip the fighting altogether and just explore the world. Exploration seems a big part of Black Sigil, but the constant battles really limited my ability to become absorbed in the environments. It soon became too much of a test of patience to slog my way through to the next interesting part.

For now, I have given up on Black Sigil. But the world itself is just intriguing enough to put aside for a quiet, rainy day when I might have the time and patience to give it another try.

You can support Amber by buying Black Sigil: Blade of the Exiled