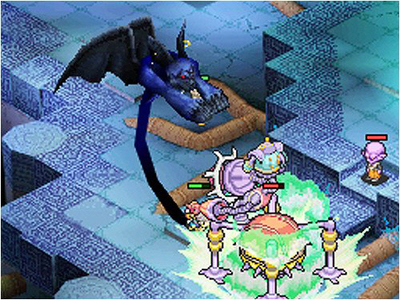 Blue Dragon Plus DS is an interesting blend of strategy and role-playing, but limited controls make it feel less strategic than it could be. Blue Dragon isn't very welcoming to newcomers and I struggled to become involved in its story or characters. It ended up being a rather empty microcosm.

I was expecting Blue Dragon Plus to function like a classic Japanese role-playing game - it uses a typical top-down perspective, with anime sprites and a core cast of adolescent heroes. However, it also incorporates simple real-time strategy with an unexpected emphasis on squad tactics.

Each character has their own strengths and abilities, with tips provided for their strategic use. Unfortunately, the stylus controls and awkward path-finding are not well setup for micro-management, and I usually found it much easier just to select everyone and have them all charge at the nearest enemy.

There was a clear threat to the world, and good people determined to save it, but on its own that just isn't enough to draw me in.

Battles can get visually chaotic on the small screen, and although there has been some attempt to give individual characters distinctive silhouettes, the sprites are quite small and it was sometimes difficult to select the character I was looking for.

The other frustrating element in Blue Dragon Plus was its habit of continually splitting the group to pursue multiple goals simultaneously. By the time they had split into four separate parties it was feeling quite ridiculous. It really weakens the strength of the group as a whole, and I found it hard to believe that anyone skilled in battle would make so many poor decisions.

The mythic quality of the game didn't fare much better. Unfamiliar characters and settings made it very difficult for me to form connections between the game microcosm and my own life. Not having played the previous Xbox 360 game, this sequel didn't help me get up to speed.

It I was left with a lot gaps to fill in for myself about how everything fits into the broader scheme of things. The cut scenes helped a little and were graphically impressive, but I felt disconnected from any ideas that might be contained within them. It was difficult to care about the flat characters and events that lacked any broader context.

The motivations of both heroes and villains, and the history between characters, were sometimes implied, but it always felt like I was an outsider - that the game expected me to have prior knowledge of all this. There was a clear threat to the world, and good people determined to save it, but on its own that just isn't enough to draw me in.

It's not exactly a terrible game, but it is fairly bland and uninspiring.

I liked Blue Dragon Plus' concept of Shadows though. A Shadow is a mythical beast, such as a dragon or phoenix, which characters control via inner power known as the "light of the heart". The ability to control a Shadow was once considered rare and powerful, although now many characters have now mastered it. Some robots have even found ways to control Shadows by simulating a soul's light.

Each Shadow gives a physical manifestation to a particular character's inner strength - like a violent imaginary friend or, possibly, an animal spirit-guide or protector. Although it was a slightly heavy handed approach to character development, I liked the idea that Shadows are becoming progressively less exclusive, as more people discover their own personal strength and ability to connect with their heart.

In the end though, a lack of sophisticated characters and the world I struggled to engage with (not to mention the controls) made Blue Dragon Plus a bit of a failure for me. It's not exactly a terrible game, but it is fairly bland and uninspiring. It was too empty an experience to satisfy my microcosm wants - where I'm searching for interesting game environments, and their connections to ideas in the real world.

You can support Amber by buying Blue Dragon Plus