Drawn to Life: The Next Chapter DS Review

Drawn to Life: The Next Chapter DS 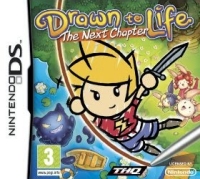 Other GamePeople columnists have reviewed this from their perspective - huh?:
Odyssey Gamer (DS) 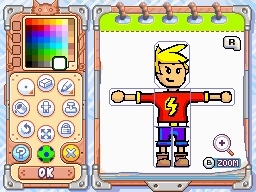 Drawn to Life: The Next Chapter DS blends serious and friendly elements in unexpected ways. Difficult and convoluted themes deepen the microcosm, but risk making it inaccessible.

Drawn to Life: The Next Chapter feels a bit like stepping into a paddling pool and being washed out to sea. The bright box art features smiling creatures, and focuses on drawing and imagination. I expected a light-and-fluffy kids' adventure. What I actually got was a dark tale about faith.

In my own life I've been through a few phases with religion. Starting with the simple belief of a child accepting whatever I was told. Then later discovering the attempted rationality of science, and rejecting anything based on certainty instead of theory and evidence. Finally, I came to accept the value of personal spirituality, even without belief.

If that sounds confusing you're absolutely right. That's my individual journey, but everyone's relationship with faith (or lack thereof) is different. That background will alter your experience with Drawn to Life: The Next Chapter. In my case, it was morbidly fascinating.

The primary message I took away was that God lets some truly horrible things happen, but we just have to accept he loves us and knows what's best. I find that an incredibly difficult theme to swallow, and it's definitely not what I expect from a kiddy drawing game.

What I actually got was a dark tale about faith.

Everything starts off cheerfully enough, although of course there is the usual story of evil to overcome. The fox-like Raposa find one of their people kidnapped, and the colour draining from their world. They set off on the back of a flying turtle to set things right. They also call on The Creator to send a new hero to help them.

Drawing remains the main appeal of Drawn to Life, particularly sketching your own hero who you then play in the game. I know it's a gimmick, but it's an effective one. I spent a long time working on my hero, a circus-like figure in top hat and layered skirt. She wields a glowing axe, balances on lily pads, and collects cups of tea as health pick ups -- all elements of my own creation.

Customising the world with my drawings meant I could bend the microcosm to fit me far more than usual, although this was only superficial. I lacked real power or choice, and could only do what the characters asked of me. Really, I just wanted to be the hero, not an amorphous God watching over proceedings and granting prayers. The hero is a mannequin animated by The Creator. In other words Jesus (ed: or maybe a unwilling Jonah?), with less healing the sick and more beating up ghost pirates.

Jesus with less healing the sick and more beating up ghost pirates.

The whole premise was a bit uncomfortable for me, though I was curious to see where they would take it. If I were truly God to these people, wouldn't I have more choice and control, like in Black and White or The Sims? Except I'm not my own version of God, I'm playing out the role of a pre-existing Christian God.

For a long time, this God's gender wasn't specified, but in the final stages of the game one of the characters finally slipped and described The Creator as 'him'. The patriarchal view of God made it clear to me that I wasn't actually The Creator after all, and didn't really have a say in this world -- instead watching someone else's events unfold.

From here Drawn to Life: The Next Chapter proceeds through some fairly pedestrian platforming levels, broken up by long JRPG-style cut-scenes. Along the way it still manages to tackle some surprisingly heavy themes along the way, such as betrayal, slavery and self-sacrifice. I'm happy to see these included, but it took me completely by surprise. I imagine some families having difficult questions to answer, so maybe a little more indication of what to expect on the box would be a good idea.

It tackles some surprisingly heavy themes along the way, such as betrayal, slavery and self-sacrifice.

However, despite the mature concepts, it was hard to get away from the feeling of playing a kids' game. My childish drawings and the simple level design were incongruous with the darker themes. Along with the religious overtones and mind-bending plot twists, Drawn to Life: The Next Chapter certainly isn't going to be universally appreciated.

In the end that's really what I appreciate about it. It has a vision and commits to it, despite the risks that come with subverting expectations.

Drawn to Life: The Next Chapter is a fully realised microcosm, exploring belief, pain and false realities. Even though it doesn't match up with my world view I can't help but respect that.

You can support Amber by buying Drawn to Life: The Next Chapter