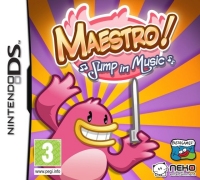 Maestro! Jump in Music charmed me with its creative blend of rhythm and platforming. I consider it a microcosm of silliness, by no means a criticism.

Maestro! features a pink bird of unknown species named Presto, who is trying to rescue the musical notes stolen by a jealous spider named Staccato. Strumming and tapping the correct timing of notes with the stylus will keep Presto running and jumping along a series of tightropes, and collecting items which also act as notes to further embellish the song. It's an odd idea that actually works surprisingly well. Boss fights are conducted using a Simon Says mini-game.

The game has personality - that soon leads to silliness. Between levels there are a series of jokes and references to popular culture, movies, music and video games. I particularly enjoyed catching a cheeky Duke Nukem reference among the otherwise friendly, cartoon atmosphere.

I'm usually a rather serious person. In the video store I'll naturally browse the drama or horror titles rather than comedy. I enjoy arguably dry pursuits, such as academic writing, and I often need people to explain humour to me because there are a lot of forms of it I simply don't understand. When I play games it's usually in a focused, determined way. I concentrate on the story, explore every inch of the levels, collect as many items or power ups as possible, and so on.

Maestro! is not a serious game, and it was embracing the silliness that allowed me to have a blast with it. I giggled at the goofy humour, and at myself when I lost my rhythm and created a cacophony. I happily grooved along to the midi tunes, despite occasionally itching to hear a better quality version.

The tracks are well arranged, but do have that tinny midi quality. On balance that didn't matter though, and I enjoyed the selection of classical, traditional and classic pop tunes. Collecting tomatoes in Venice to the tune of The House of the Rising Sun is one of the coolest little game moments I've encountered in a while.

The importance of silliness is something I could probably do to be reminded of more often.

The importance of silliness is something I could probably do to be reminded of more often. We all need some balance and time away from the serious and dark sides of life. Putting Maestro! under the scope forced me to consider my own habits and why I worry about acting like a kid. It's often a lot better for me when I decide not to be embarrassed by things and just have fun.

To accuse someone of 'acting like a child' is a common insult, but I don't think it should be. Growing up and gaining responsibility often means less time for fun and 'childish' pursuits. But it's keeping hold of some of these things that makes us more well rounded people, and reduces some of the stress that makes up the 'adult' world.

I'm relatively new to rhythm games and one of the things that surprises me is how much of a change I need to make in my brain. I'm used to being able to rely on my vision, but for a rhythm game I really need to trust my ears. Until I let myself make that switch I do quite poorly. Once I get there suddenly everything becomes a whole lot easier.

Difficulty and unlocking options are one element that Maestro! could have implemented much better. Being forced to play through the whole game on the easy difficulty setting first was okay for someone like me. However, I did feel a bit cheated when I realised getting to those higher difficulty levels was required for access to full length tracks, and other features such as the optional singing component.

This setup made the first play through feel like an extended tutorial. It really did help me switch my rhythm brain on, but for anyone more experienced with music games it would probably be a tedious beginning. At the higher difficulty levels Maestro! becomes far more chaotic and enjoyably challenging.

Maestro! Jump in Music was an amusing diversion, and quite a unique experience. Its flaws are overshadowed by a great sense of fun. That's a miniature world I am very happy to visit.

You can support Amber by buying Maestro! Jump in Music