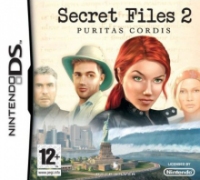 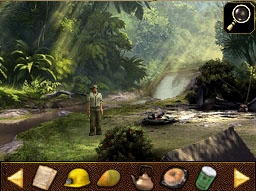 Secret Files 2: Puritas Cordis DS confounded my hunt for real life reflected in videogames. Swinging from offensive to embarrassing, this point and click adventure was no microcosm.

I still have a weakness for point-and-click adventures, but Secret Files 2: Puritas Cordis DS makes me embarrassed to admit it. The puzzles are reasonable (if not terribly inspired) but the story is utterly contrived, and I find some other issues difficult to overlook.

The following quote is a good example of why I have some major problems with the Secret Files series: "Women. Terrible. It's just impossible to have any rational conversation with them."

Protagonist Nina Kalenkov spends a surprising amount of time commenting on gender and race, and the result isn't pretty. In the first major section of Secret Files 2: Puritas Cordis I began writing down the inappropriate things Nina said, and easily filled half my whiteboard. To be fair, she does get called out for her prejudices on occasion - the racial ones anyway - but I still have to wonder what possessed anyone to create such an unlikable heroine.

The humour in Secret Files 2 is also pretty cringe-worthy, particularly from Nina. The jokes might be suffering in translation from the original German, but I think it's more a case of the writers trying too hard to be tongue-in-cheek. The constant quips and clumsy fourth-wall breaking gets old very fast.

The main character acts as my eyes and ears in a game microcosm. In a sense, I become that character to be able to explore. I don't always need that character to be likeable - I am okay with playing a role - but if they are particularly obnoxious I want a reason. An artistic vision, or an important point they help illustrate, perhaps.

I'm not willing to play along with trying to make prejudice light-hearted and acceptable, it's repugnant.

Here, I got the impression I was supposed to accept Nina's inappropriate statements as a kind of quaint humour. I'm not willing to play along with trying to make prejudice light-hearted and acceptable, it's repugnant.

I have to admit, Secret Files is replicating elements of the real world. It just happens to include parts of the world I really don't like. The parts where it's considered fine to describe women as bimbos based on their dress sense, for example.

I played the previous game in the series, Secret Files: Tunguska, on PC and although I don't really recommend this series at all, if you're going to play it, PC works much better than DS. The small screen isn't well suited to object hunting, and although you can highlight all the objects on screen, they are sometimes very close together and tricky to select.

Cut scenes also naturally suffer from the lower resolution and power of the DS, and are even displayed in letterbox format, making for very small videos indeed. It is very obvious this game was not originally designed with the DS in mind. In one notable section I was attempting to disguise myself as another character, but her display on screen was so tiny I had to guess at some of what I was trying to replicate.

One advantage to the DS, at least, was not having to put up with the terrible voice acting. How exactly does a Russian character living in Germany pick up a perky American accent, anyway? This kind of immersion-killing silliness makes me feel a bit foolish for trying to write about how games can provide meaningful experiences.

I get the feeling I'm not supposed to hunt for reflections of reality in these games.

If I can get past the technical limitations and prejudiced main character in Secret Files 2, I'm left with an over-the-top globetrotting adventure. In the style of traditional point-and-click adventure most of Secret Files 2 involves MacGuyvering objects. This is broken up occasionally by larger mechanical logic puzzles, which are really the high points of the game.

I wish the object manipulation in this style of adventure game did have more basis in reality. Then I could easily solve any problem by ferreting around in the nearest rubbish bin and sticking things together with chewing gum. Secret Files 2: Puritas Cordis does at least follow reasonable logic with its puzzles, which was a big step up from some of the nonsensical solutions from the previous game.

I get the feeling I'm not supposed to hunt for reflections of reality in these games. I am better served by switching off my brain and just accepting it for what it is. Ironic for a puzzle-based game to encourage me to think less, but that's my reaction to such a poorly written, banal, and problematic adventure.

You can support Amber by buying Secret Files 2: Puritas Cordis