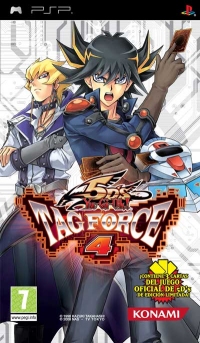 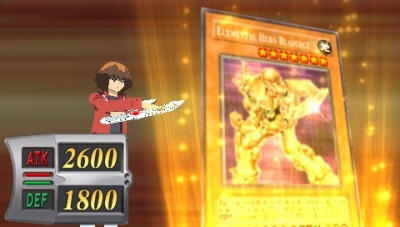 The strategy in Yu-Gi-Oh! 5D's Tag Force 4 is deep and interesting, but ultimately it was too much work to master. I'll happily leave this one to existing fans of the series.

Yu-Gi-Oh! began as a Manga series created by Kazuki Takahashi in 1996. It has since become a huge franchise spawning TV series, collectible card game, movies and video games. Like other Yu-Gi-Oh! games, Tag Force 4 focuses on collecting cards and building powerful decks to duel other characters.

It's all fairly impenetrable to newcomers like me, and I was intimidated at the thought of jumping into such a well-established world. Thankfully, tutorials are included to teach the basics of the card game. These took over an hour to work through, but helped a great deal.

The basic interface and mechanics of the game are clear and interesting enough. Still, with over 4,000 cards included the time investment required to begin understanding the depth of strategy was far too much for me. My win ratio remained low, and there was nothing compelling me to make the commitment required to get past that point.

Between card battles there is a strong focus on friendship building. That could have been a really interesting look at how games are teaching kids about social interactions, in the safe space provided by the microcosm. Unfortunately, the conversations are too oddly abstract to really connect with.

Unfortunately, the conversations are too oddly abstract to really connect with.

You play a silent protagonist, with their features obscured under a baseball cap. We never hear our character speak, but his words are hinted at in strange ways. Conversation is handled partly through mini-games. One such game represents your ability to gather your thoughts appropriately before speaking, and characters react according to how well you navigated your thought processes. This leads to some incongruous reactions, with many people apparently very pleased at how well you just scolded them for admitting to something naughty.

Interactions with characters are described rather than shown. Along the lines of, "You tell a great joke and they are amused," or "You hang out and have a fun conversation about duelling." Sometimes I get the feeling they are trying to send real world social messages in their character responses, but it's pretty hard to follow even when you are looking for it.

There is a culture of friendship and competition to back them up, and a huge variety of tactics to explore.

I have to assume Yu-Gi-Oh! makes more sense in an appropriate cultural context. That context involves having a friendship group to share and understand the game, certainly not me sitting at home in my lounge room trying to puzzle it out. Perhaps in that social context having a real card-duelling friendship circle compensates for the odd representation in game.

I do understand the appeal of these collectible card games for those who do get caught up in the craze. They feed into the compulsive 'collect them all' reflex many gamers will be familiar with. There is also a culture of friendship and competition to back them up, and a huge variety of tactics to explore.

Those of us too old, or too involved with other interests, to be part of that scene will remain pretty far out of reach.

You can support Amber by buying Yu-Gi-Oh! 5D's Tag Force 4