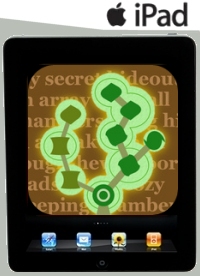 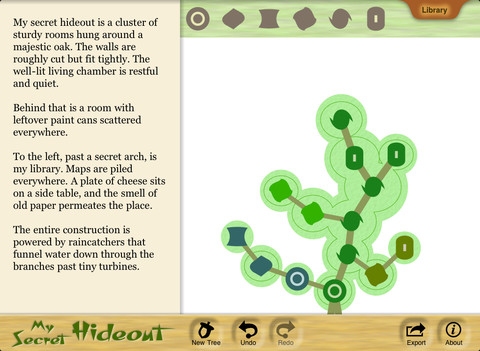 My Secret Hideout on iPad is more playful than game-like. It's a simple creative toy without any particular goals or rules. Arrange the leaves and it generates a description of your secret hideout.

You drag and drop different-shaped leaves to form nodes in a branching structure. Every addition to the tree modifies the description of your magical tree-house. Here's one of my simple creations:

Subtle differences in the position of leaves result in are enough to change the description, so the result is always at least slightly unpredictable. Sometimes I move nodes around, trying for a specific combination. Other times I accept whatever falls out.

My Secret Hideout is a very simple application but presents an imaginative microcosm. If I were a tech writer I'd judge it as a procedural text generator. If I were more artistic I might consider its attempt at interactive poetry. Personally, I'm most interested in how well it captures the feeling of creating a secret hideout.

I had two major hideouts while growing up. The first was a tree-house my Dad put together as a side-project while building our family home. It began as a rough wooden platform in an old gumtree; simple but very stable.

Like a lot of my Dad's ideas it soon expanded into something more impressive. Once the walls and roof were added the scraggy tree couldn't support the weight any more, so it had to lean partly on the water tank. It acquired many leftover materials from the house: proper roofing steel, insulation batts, a linoleum floor and little lace curtains.

Our ramshackle den developed its own intricate mythology.

It was a well built tree-house, but my sister and I didn't play there much. We never intended to be ungrateful, but inside it was dim and roughly finished, and just didn't feel very welcoming. At the time we were jealous of a tree-house further up the road, which had beanbag chairs and a working electric light. But the real problem was lack of imagination. Our tree-house was less of a hideout and more of a sterile model house.

Meanwhile, us kids jumped the fence and created our own retreat out of a fallen tree. Technically we were trespassing, but I doubt anyone minded. We built walls of sticks and leaves, and made intricate rock gardens. Every summer we would abandon it for fear of snakes, but when the weather cooled down we would repair the walls and sweep the paths. Over the years our ramshackle den developed its own intricate mythology, now mostly forgotten. Even when I started high school, and most of my friends had long abandoned imaginative play, I would still visit our hideout.

Our crude house was far less comfortable than the tree-house. We used rocks for chairs and had to crouch to fit under the low, branch-covered ceiling. But it was our own creation, organically developed into whatever we wanted it to be. The tree-house, designed and constructed from the most logical principals, could never really be our space and was never populated with our imagination.

My Secret Hideout is somewhere between these two extremes. It can't follow my own ideas, but there's something very natural about the way the tree-house develops with each additional node. The hideout descriptions possess a surprising amount of warmth.

It's worth noting My Secret Hideout is creating an adult space. Rich descriptions of drying herbs, libraries of academic books or romance novels, rooms of scientific discovery, a glass of wine on a side table. These are not childish spaces, but they are presented in a slightly fantastical way.

I rarely see adult imagination indulged like this. Sometimes I worry I've forgotten how to . So, it's wonderful to remember we still have spaces for imagination, play and sometimes secret hideouts to take a break from the stress of life.

You can support Amber by buying My Secret Hideout