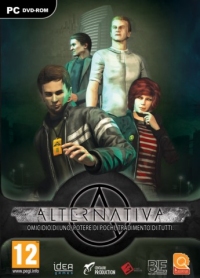 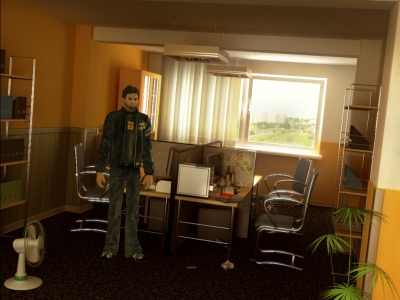 Alternativa's point and click adventuring revels in a cyber future. Happily though, it's life's harsh realities that are mirrored even if the puzzles themselves are a little easily resolved.

Equal parts Ghost in the Shell and Blade Runner, Alternativa is an artistic, moody glimpse into a dystopian future ruled by the mega-corporations. Engineered by Czech developers Centauri Production, there's something positively cinematic about the presentation of this point-and-click adventure; it's the kind of game that begs a low-budget, stylistic indie film adaptation.

Then again, I could be just biased.

You see, I grew up with things like the Matrix movies and Shadowrun. Hacking wasn't just something you could get arrested for. Hacking was, well, cool, and apparently required a dress code consisting of sunglasses and black leather trench coats. Regretfully (depending on how you look at things), Alternativa isn't quite as glamorous as that.

Instead, the developers have taken the darker overtones of the genre and thrown in to the mix. There are discarded, twitching androids everywhere, looking for all the world like defeated soldiers left to die. The slums look appropriately run-down, the people suitably down-trodden and there is even rape woven into the story. Those looking for something wholesome had beset go elsewhere.

As much as I enjoy gloomy titles, I'm surprised at myself for not feeling as strongly about the overwhelming bleakness as I normally would. In fact, looking back at my experience with the game, I find myself hard-pressed to feel anything more than a vague horror and a tightly-guarded sense of sympathy.

This is perhaps a little telling of how desensitised I've become to real life disaster stories. My complacency could well be because Alternativa creates a world, much like our own, where you expect these things. Very often these days, you see the news inundated with imagery of people who have committed suicide from failed endeavours. Then there are careless decisions from governments, or the severe injuries resulting from collateral backlash because of someone's anger and a whole assortment of other ugly, unpleasant things.

Having gushed so whole-heartedly about the presentation, I find it strange to have to say that I'm still undecided as to whether or not I enjoyed the game itself. There's no mistaking the fact that Alternativa has successfully captured all the things that first drew me to the genre. It's beautiful, intricate and ever so exquisitely executed but it has its problems.

A beautiful touch that intimately echoes the reality of our own world; if you're not performing, you're out.

For one, the puzzles are nowhere near as soul-crushingly difficult as I would have liked. Call me a masochist but that's something I've come to expect from adventure games. Given the bleak tone I expected something that would take me weeks to finish, not puzzles that pretty much resolve themselves at a moment's notice.

Of course, given how attention spans have been dwindling over the years, I can't help but wonder if the developers had actively chosen to make things so simplistic. It's a conundrum that the video gaming industry has been facing for some time now. Before, there was ample room for personal experimentation. These days, developers have to balance general accessibility with their actual content.

In Alternativa's case, I think they've weighed too heavily in favour of simplicity. However, I'm also a sucker for punishment; I wouldn't have any reason to bash my head incessantly against things like the King's Quest and Monkey Island series otherwise.

In terms of Alternativa's story I'm still somewhat lost for words. I mean, I like Alternativa, I really do. As I've mentioned a few times before, it genuinely does do a brilliant job at capturing what a dysfunctional cyberpunk future should be like. Certainly, the plight of the characters reflect that as well. Early into the game, you're already introduced to the complexities of life within this universe and the level people will go to to achieve what they want. There is this constant, lingering sense that everyone within that future is completely expendable - a beautiful touch that intimately echoes the reality of our own world; if you're not performing, you're out. That's it. No questions, no appeals.

In that respect, Alternativa frightens me. I live in Asia, a region ruled by an endless pursuit for perfection; the stuff you see on television is at least partially true. Those attempting to deviate from the norm are often admonished and pushed back to the flock.

Alternativa feels like a digital evolution of such a mentality; I can see how children growing up in such a future might turn out. I can see the schools, the endless tuition, the succession of jobs and mindless loyalty to the parent corporations.

With so many games out there waving enormous mecha and galaxy-devouring monsters at you, it's almost surreal to run across something like Alternativa. It sounds a little worthy I know, but Alternativa really does portray a future I'm deeply afraid my children will one day see.

A beautiful touch that intimately echoes the reality of our own world; if you're not performing, you're out.

Much like real life, language also plays a factor here too, but not perhaps in the manner you might expect. While you'd be hard-pressed to find grammatical errors in the dialogue, the conversations remain almost painfully awkward. Seeing as how this is an adventure game, this is almost an inexcusable flaw; the heart of such titles lie within the storytelling, after all.

Alternativa is not an English game. It was not produced in a country where English is spoken natively. It came from a country where other languages have taken precedence. If we were to get a team of Americans to translate Monkey Island for the Russian community, would both the humour and the language flow as flawlessly still? I'm certain if Alternativa was played in its native tongue, it would have felt far more eloquent.

Alternativa probably won't be a game for everybody. The language, the slightly dated graphics, the simplistic puzzles and even the adult overtones make it somewhat unapproachable. Beyond this though, and particularly in its mirroring of life's hard lessons, there is something beautifully cinematic in this cyberpunk steeped melodrama.


You can support Amber by buying Alternativa