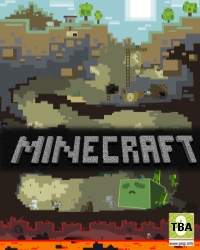 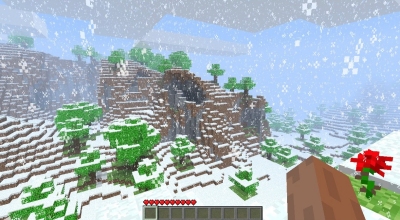 Minecraft is a game of freeform building, exploration and survival. Each world is procedurally generated, providing a unique kingdom on which to leave your mark. Although still in alpha, with a bunch of features yet to be added, it's already hopelessly addictive.

There are currently no predetermined objectives or missions in Minecraft. This unstructured play is deceptively alluring though, and it's very easy to become absorbed in the microcosm. In a sandbox game like this no two experiences are the same. Our adventures and creations are the product of who we are, and what ideas we choose to bring with us.

Loading up a single-player world, I was greeted by a snowy landscape full of steep cliffs and ice-covered lakes. It was a wild and lonely beginning, and my first task became building shelter and basic tools.

Starting by chopping down a tree with my bare hands, I was certainly getting back to basics. I appreciated the feeling that anything I achieved here was ultimately down to my wits and own two hands - I had already forgotten they weren't really my hands.

Night can fall quickly in Minecraft, and brings with it monsters that groan menacingly, but burn up when the sun rises. Since I hadn't found a light source yet; I spent my first night huddled nervously in the dark, and peeking out my door for any sign of approaching dawn.

Over the next few virtual days I began to get my bearings and exert more control on the shape of my surroundings. There is something very satisfying about carving out my own space. In real life my level of control on my environment is restricted, but Minecraft's potential for creation is pretty much limitless. There will be plenty of time for grand schemes, but my initial priorities were to explore and gather resources.

I hadn't found a light source yet; I spent my first night huddled nervously in the dark, and peeking out my door for any sign of approaching dawn.

Investigating not too far from my base of operations I was surprised by a sudden vertical drop into the earth - so surprised in fact that I promptly fell to my demise. I needed to be more careful around the mines and caves.

Clearly, I've lost some of my instincts for being careful where I step. I grew up in an Australian former gold rush town. In the 1850s it was full of miners hoping to make their fortune. We had to be careful and keep an eye out for old, unmarked mineshafts. Often, rather than refill an entire disused shaft, people would build wooden supports part way down and just fill in the top section. Over time the timber rots, and shafts can suddenly reopen in unexpected places.

In the State Forest where we occasionally went looking for wildflowers, I also remember a particular ridge line that was riddled with mineshafts. At the time there were no signposts or barriers for safety, just a series of holes in the ground. One stood out: a narrow vertical shaft. It took several seconds for a thrown stone to reach the bottom. We held our breath, waiting for the sound of our stone eventually hitting solid rock.

Someone dug that shaft, and deliberately climbed down into it, before tunnelling sideways. It was dark and dangerous, and the thought of falling down there was terrifying. I never quite got that image out of my head.

Someone dug that shaft, and deliberately climbed down into it, before tunnelling sideways. It was dark and dangerous, and the thought of falling down there was terrifying. I never quite got that image out of my head.

The Minecraft hole I'd rather dramatically discovered probably wasn't as deep as that, but it was still more than enough to end me. I had found my critical mission: I was determined to conquer that shaft, and any demons I might find lurking down below.

My personal history caused me to reject the easier caves as starting points, and begin my descent straight down. But first, I built a fence around it to prevent more unfortunate accidents!

Progressing gradually downwards took quite some time, slowly building steps and ladders, and lighting the way with torches where needed. I passed a few side-passages on the way down, and I heard the sound of monsters somewhere in the darkness. About half way down I lost my nerve and made a hasty retreat. I made it back to the surface just as the sun was beginning to set.

It all practically begged me to explore.

The next day, I continued my downward climb. I hit an awkward section though and fell the last few metres with a painful thud - but I was still alive. At the bottom the tunnel opened out into a breathtaking cave complex. There were some iron ore deposits clearly visible, and even a few flecks of gold. A river of lava provided enough light to cast eerie shadows, and I was sure I saw a hint of something ominously moving in the distance.

It all practically begged me to explore. It's only the beginning of my personal adventure, and I've no idea what else Minecraft has in store for me, but I'm looking forward to finding out.

You can support Amber by buying Minecraft