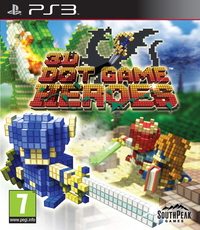 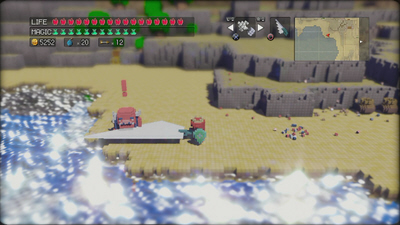 Rather than giving me an original miniature world to explore, 3D Dot Game Heroes borrows from pre-loved creations. It's heavily inspired by classic Legend of Zelda, although to the point of being derivative. Underneath the retro nostalgia and blocky graphics lies a shallow experience, lacking significant appeal in its own right.

The most distinctive feature of 3D Dot Game Heroes is its visual approach. The king of Dotnia, having decided the kingdom's 2D charm is outdated, decrees a switch to 3D. The result is a pixilated style carefully rendered in three dimensions. It's quite creative and skilfully done. But also gimmicky, and actually pretty ugly when it comes down to it.

Beyond the graphics, little here is original and it's not trying to be. 3D Dot is a return to old-school adventuring, and enthusiastically embraces the cliches and mechanics that go along with that. It's highly self-aware and constantly references other games, from usual examples like Final Fantasy, to Demon's Souls from the same developer.

The game is very deliberately based on 2D Legend of Zelda. This ranges from the use of familiar items such as the boomerang and bombs, to the retro-inspired music. It's a highly affectionate parody and homage; I just don't find it particularly clever or enjoyable. The caricature is so close to its subject matter it becomes the very gaming stereotypes it is referencing. Including the irritating parts, like the weak story and constant beeping noise on low health.

This approach is not immersive -- it actually emphasises the artificial nature of the microcosm. 3D Dot relies incredibly heavily on nostalgia for its appeal. Since I'm not much of a Zelda fan it isn't my particular brand of nostalgia. Without that fond recollection to fall back on it felt rather hollow.

The caricature is so close to its subject matter it becomes the very gaming stereotypes it is referencing.

Since the world was a bit of a let down, I hoped to find relief in the character options. There is a wide selection of pre-made characters, or I could even create my own blocky protagonist for a more personal touch.

I selected a succubus, in the hope of subverting the hero's journey. Sadly, I was confined to being the descendent of a legendary hero called upon to save the kingdom and rescue the princess, regardless of appearance. There are some minor stat differences between characters, but with little effect on game progression. You can even change characters at any time with little impact.

I was a bit annoyed that male characters get a strength bonus, while female characters have lowered cost for casting spells. With a heavy emphasis on swords it doesn't seem equal - just one of many old fashioned elements.

My character's great destiny was apparent to the king and others she met, regardless of how I might feel about it. There is no effort involved in earning the identity of a hero. As a birthright this idea becomes meaningless, and ridiculous in many cases. In my head I role-played my succubus being mean to the villagers, and making lewd comments about her ability to handle a massive sword as she swung around a weapon taking up half the screen.

The game was determined to treat me like Link, regardless of what might be going on in my head. I had to wonder why it bothered with such unrestricted character customisation, only to force me into a constrained, Zelda-inspired world.

The game was determined to treat me like Link, regardless of what might be going on in my head.

Maybe it's partly my own failing - I had certain preconceptions about what constitutes a hero. After all, in World of Warcraft I played Horde and considered my characters no less heroic for having horns or green skin.

There is nothing to say what a hero should look like, and in that sense it's an interesting approach to put under the microscope. On a human level, many people are drawn to this style of epic quest, and here find they can have an important destiny. Link is a suitably blank slate for players to project their chosen attributes onto.

I prefer to believe in choice and diligence over innate factors like destiny, which is part of what detracts from these games for me. If I must fulfil a destiny I'd at least prefer to struggle for it, and I don't just mean by having to overcome retro difficulty level. 3D Dot Game Heroes feels unsophisticated, and simply didn't include the more believable reflection of reality I've grown used to in modern games.

You can support Amber by buying 3D Dot Game Heroes