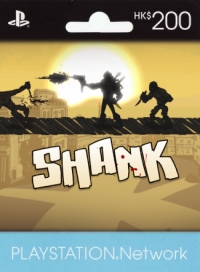 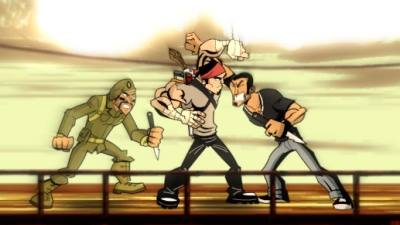 Shank PS3 is a cartoon microcosm drawn with bold, angular lines and featuring characters as tough as nails. It's a chance to explore a brutal but simpler world, where maybe you can solve your problems with your fists. Better yet, with a blade slipped expertly between the ribs. (ed: ouch!)

In Shank, the men are mobsters or muscle-bound giants, while the women are lithe assassins and pole dancers. Even among this ruthless cast Shank himself manages to be worthy of his name, and leaves a bloody trail of bodies in his wake. He doggedly shoots, slashes and chainsaws his way towards revenge against the people who kidnapped his girlfriend.

Cinematic sections, such as silhouetted lighting or slowmo jumps, serve to emphasise danger and suggest a heroic vibe. It's really not a heroic adventure, though. The conventions here contribute instead to a delightful but guilty feeling of wrongness. I feel a subtle uneasiness about playing Shank. Sometimes less subtle, such as the truly disturbing gimp boss fight.

I love discussing games that push boundaries and provide new and complex worlds to explore. In many ways, Shank is the antithesis of what I usually promote. It isn't an evolution of world or narrative. It's simple and retrograde; returning to old-school 2D beat 'em up mechanics and telling a cheesy story.

But I enjoyed Shank in spite of myself. For all the unflattering archetypes and repetitive structure I appreciated the chance to get down-and-dirty. It's a visceral brawler, and not at all virtuous or particularly meaningful. At the same time though, there is something primal and satisfying about it.

There are a lot of little things in life to get angry about though, from politics to the person who keeps parking in my personal space.

The animations are smooth and stylish, while switching between a range of gory weapon combinations. Combat probably isn't as diverse or deep as it could be, but it's approached with plenty of flair and enthusiasm.

While revenge is a common theme in stories it can also be slightly uneasy. It's a quest of desperation, spurred on by the point where a person snaps and loses control. There's nothing noble or honourable about that. Dishing out a primitive version of justice is about following fairly base instincts. It usually involves becoming as bad or worse than the original criminals.

As a friendly, reasonably well-adjusted person it's not completely comfortable to admit to having angry impulses. There are a lot of little things in life to get angry about though, from politics to the person who keeps parking in my personal space. I can't seek vengeance in the real world and wouldn't really want to. I'm never going to blow up parliament or slash offending car tyres, but some anger is natural and it has to find an outlet somewhere.

Maybe that anger will lead to a little more stress from keeping everything inside, or an extra harsh word to a loved one. On balance I think watching Kill Bill or slashing up some pixels in Shank is a healthier option. The violent revenge story fills an occasional but important role for me.

The violent revenge story fills an occasional but important role for me.

Shank's single player campaign takes around three hours to complete - a little longer for me due to limited experience with the genre. A short game suits it just fine. Revenge is like a hot fire, burning quickly until exhausted. My own impulses are also easily sated, and I didn't need it to sustain itself any longer.

One thing that might rekindle the experience for me is the separate co-op campaign. I'm looking forward to trying it out as soon as my partner-in-crime has recovered from the flu. Between us we should be able to cause all kinds of havoc in Shank's caricatured environments.

You can support Amber by buying Shank