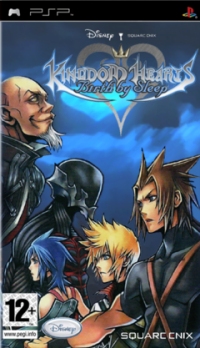 Other GamePeople columnists have reviewed this from their perspective - huh?:
Family Gamer (PSP) 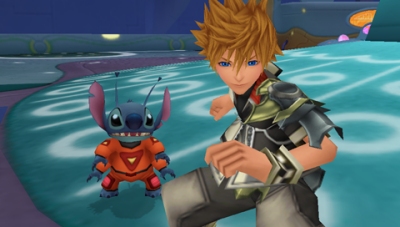 Kingdom Hearts: Birth by Sleep PSP is a colourful adventure, with elegant combat and a series of fairy tale worlds to investigate. The non-linear narrative hinted at a more complex story, which turned out to be a lot simpler than I had hoped. Still, it's an intriguing and polished roleplaying game and well worth experiencing.

I came very close to giving up on Kingdom Hearts: Birth by Sleep within the first few hours. The first boss featured a large difficulty spike, which caused me to worry about how I would fare with the rest of the game, even tempting me to almost change the difficulty. Instead, I asked my partner for guidance, since he had spent quite a bit more time with the game.

I handed over my PSP fairly reluctantly, since I don't enjoy asking for help. But one thing quickly became very clear: he was struggling too. As it turns out, the problem was caused by running the game from the disc instead of using the install option. Accessing the UMD was causing lag during combat, making it much harder to time moves.

Birth by Sleep is a pretty game, but the graphics do come at a cost and I highly recommend making space on your memory stick for it and toggling the setting to higher CPU usage. Once I did that, everything went much more smoothly.

I'm glad I worked out my issues with Birth by Sleep, because after those initial teething problems I really began to enjoy it. The Kingdom Hearts series seems at first an unlikely concept, which draws together elements from Disney and Final Fantasy. The mix of Disney's bright, well known fairy tales and Square Enix's less straightforward use of symbolism and internal conflict, creates something a bit surreal. But given that Kingdom Hearts deals in dreams, this vibe actually works in its favour.

The mix of Disney's bright, well known fairy tales and Square Enix's less straightforward use of symbolism and internal conflict, creates something a bit surreal.

Birth by Sleep is a prequel to other Kingdom Hearts games, and focuses on three close friends all working towards mastery of their Keyblades and themselves. Terra is the strongest of the three, Ventus is more speed-based, and Aqua has the most powerful magic. In addition to the different combat styles, playing through each of the separate character journeys reveals different elements of the overall story.

The enemies in Birth by Sleep are known as the unversed, and are created from negative emotions. The most basic is a small, shadowy creature, while other variants include hourglasses, mustard pots and large gorilla-like creatures. The combat is well done, with a wide range of abilities and powerful finishing moves to unlock. Crafting allows you to meld combat commands together create new abilities. It's a more streamlined version of the 'materia fusion' crafting system from Crisis Core: Final Fantasy VII.

Birth by Sleep involves a series of bright, fantastical worlds, characters, and creatures. But, rather than feeling removed from reality, the fairy tales exaggerate and emphasise elements of human existence. It's a bright adventure dealing in common themes such as friendship, innocence and growing up. This makes it very accessible even to Kingdom Hearts newcomers, despite its non-linear narrative.

I was worried playing through three characters' stories would be repetitive, but there were enough unique locations, characters and boss fights to keep each pathway feeling fresh. It was interesting to see the same microcosm through each character's eyes, and how their perceptions were shaped further by whom they met.

Terra is battling his own internal darkness and often finds himself interacting with characters we immediately recognise as villains (such as Captain Hook, and the evil fairy Maleficent). This leads him to question himself, leaving him vulnerable. Ventus is younger and more innocent and he tends to seek out new friendships as well as needing to prove himself to others. Aqua's path involves balancing her loyalties to her friends and larger ideals.

It was interesting to see the same microcosm through each character's eyes, and how their perceptions were shaped further by whom they met.

Many of the characters encountered seem to represent ideas, rather than being literal identities. The Disney princesses in particular, with their unrealistically narrow waists and submissive demeanours, they seem horribly old fashioned. Included in a brand new tale like Birth by Sleep, they become mere ciphers. Cinderella, for example, is about the power of belief, which she uses to make her dreams come true.

As much as I enjoy symbolism and exploration of concepts as it helps me form connections to my own life and ideas, I was also relieved that Aqua is a more relatable character. She is a powerful Keyblade Master, and probably has the most self-confidence of the three main characters, although she still has her own challenges to overcome.

Overall I recommend Birth by Sleep, particularly for its creative mix of influences and three-part game structure. It explores straightforward but relevant themes and takes us through a series of familiar but creatively incorporated fairy tales. These are worlds I feel I already know and understand in many ways, but sometimes it's comforting to find familiarity instead of exploring wholly new microcosms.

You can support Amber by buying Kingdom Hearts: Birth by Sleep