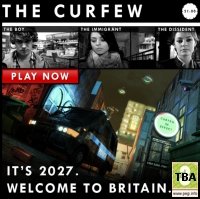 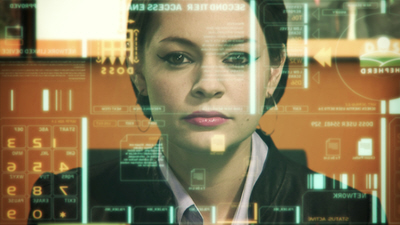 The Curfew PC is a thought-provoking look at a near-future society run on fear and rigid laws. Clearly a fantasy, but this educationally focussed game still highlights the value of maintaining our personal freedoms.

I'm a strong believer in the ability of games to educate people about real-world concepts, or at least to make us pause for a moment and think about an issue. Unfortunately, many games produced with education or social commentary as a primary goal simply aren't compelling or fun to play.

The Curfew is a browser-based point-and-click adventure game aimed at raising awareness about civil liberties. It's set in a near-future Britain, where an authoritarian regime has taken control, and imposed strict controls on citizens in the name of maintaining safety.

You take on the role of someone carrying sensitive information which could undermine the government. Sheltering in a safe house for people caught out after curfew, you know it's only a matter of time before the authorities catch up with you. You have one night to talk to the other people in the safe house and decide whom to pass the information to.

Under the watchful eye of the government, well-behaved citizens are home before the 9:00 PM curfew, and earn extra Citizen Points for dobbing in anyone they see breaking the rules. In many ways, the depiction of life under a police state seems wildly unbelievable, but it poses the question of whether this could ever happen.

Comparing The Curfew with reality - fear does tempt countries to tighten security. In our real lives we've already given up a lot of small freedoms in the name of safety. A friend of mine struggled to complete his university essays on anti-terrorism after controversial books were banned from the library. Meanwhile, extra restrictions have been introduced on airplanes, preventing people travelling with items from knitting needles to breast milk.

The Curfew might seem over-the-top, but on some level it's describing something actually happening around me, and I find that chilling.

The Curfew might seem over-the-top, but on some level it's describing something actually happening around me, and I find that chilling. Arguably, these new restrictions are about perceived rather than actual safety. People want to feel like something is being done to combat terrorism and other crimes. In The Curfew, those laws don't bring crime under control. Rather, some criminals thrive under the new regime - suddenly there are more desperate people to exploit, and an increased trade in contraband.

In addition to being about personal rights, The Curfew is largely about trust. Not only deciding whom you can trust with valuable information, but also gaining enough of their trust to make the exchange viable.

While some of the mini-games are a bit tedious, social interaction is where The Curfew excels. The core of the game involves listening to the stories of the other characters, and addressing them in a way they are likely to respond favourably to. This relies heavily on getting a good read on each individual and thankfully, the acting is usually good enough for this to work really well.

Fear of other people works against this agenda of building trust. By restricting freedom and utilising fear as a method of control, the concept of community is compromised. Connecting with people in the safe house is therefore an important symbol about the power of personal connection. I cared about the characters, and wanted them to succeed. They became more than just a convenient vehicle for distributing data.

Connecting with people in the safe house is therefore an important symbol about the power of personal connection.

The curfew is one the few educationally focused games I've enjoyed and to a large extent this is because of its atmosphere. It's well presented, with interesting visuals, carefully thought out characters, and a moody soundtrack. The Orwellian themed microcosm works to draw me in and keep me interested. Little details, such as the advertising and propaganda on the side of buildings give the impression of a fully fleshed out world that I'm only seeing a small part of.

The Curfew is a positive step towards games that are both educational and engaging. It provided an unsettling world and reminded me to value my own freedoms. More significantly for me, it demonstrated the importance of human connection as an alternative to living in fear.

You can support Amber by buying The Curfew