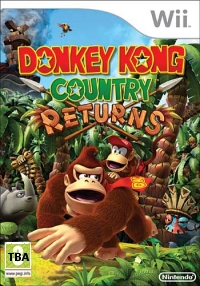 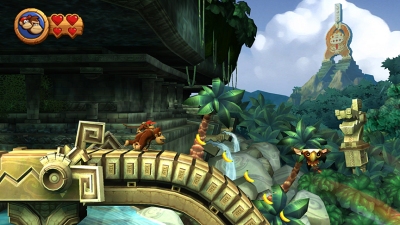 Donkey Kong Country Returns was difficult to connect with directly, but I enjoyed playing tourist in someone else's fondly-remembered microcosm.

My partner has good memories of Donkey Kong Country, but for me this new Wii instalment was a chance to see what all the fuss is about. Only one problem: platforming isn't exactly my strong suit and Donkey Kong Country Returns is fairly demanding. Progression requires speed and precision, pixel perfect mine-cart jumps -- you know the sort of thing.

If things get too rough a Super Guide feature can take over and finish the level for you (as seen in Mario Galaxy 2 and New Super Mario Bros. Wii). I took a different approach, by making use of the co-op multiplayer mode.

Multiplayer comes with its own difficulties though. To be brutally honest, it's a flawed, uneven system tacked onto a game designed more around single player. One player is frequently left twiddling their thumbs during long barrel or mine-cart sections. Worse still, lives are shared between both players and a single mistake can cost double.

It's a potent recipe for arguments, which I probably wouldn't risk if I didn't have someone I trusted and had worked through other multiplayer frustrations with in the past. Still, I enjoy co-op as a different way to explore game worlds, discovering which elements speak to each of our realities.

In this case, I was also grateful to be able to take a back seat during tricky sections. By jumping on Donkey Kong's back I could even give up control when necessary. It's unusual for me to let someone else do the heavy lifting, but in this case I was happy enough to go along for the ride.

Armed with my Diddy Kong peanut gun and rocket pack, I let Donkey Kong lead me through his world. Starting out from Donkey Kong's tree house we explored waterfalls, sandy beaches, caves, and other lively locations. It's a gorgeous place full of lush jungle scenery, with plenty of collectibles and secret areas to uncover.

The lighting is particularly striking, sometimes changing from the usual beautifully rendered cartoons into dark silhouettes set against a vivid sunset. The music consists of re-recorded tracks from the original game, with some re-mixes and originals thrown in, and it's very upbeat and catchy. For a game featuring an ape collecting bananas Donkey Kong Country Returns has an incredible amount of style.

The slick presentation is ultimately style over substance. The story is paper thin, and there's very little to meaningfully relate to. This isn't necessarily a bad thing -- sometimes light-hearted action and cute characters are all you want -- but it doesn't feel like a microcosm of reality to me. Satisfaction here will come from nostalgia, overcoming challenge, and exploring lush environments. It won't come from interesting themes or ideas.

In multiplayer, I've been discovering someone else's connection to the setting, which involves the nostalgia of many hours spent exploring environments that feel bigger than what you can see on screen. Walkthroughs weren't readily available, and secrets were discovered through accidental falls and many hours of searching. This sort of connection requires more commitment than either of us have time for these days.

Donkey Kong Country comes from a time when the graphical detail, fluid animation and jungle exploration were more stunning. This brings up some interesting thoughts for me on the importance of aesthetics for creating vivid, inviting settings.

Stylised, iconic character design can make it easier to project yourself into the scene.

Graphics always influences how a setting feels, be that through the pursuit of photo realism or a more stylised look. Here, Donkey Kong Country Returns is cartoony, but quite detailed. The screen can get busy, which adds to the challenge of evading enemies and hazards. Detail also makes the jungle feel more alive, in the absence of a more engaging story or characters.

Sound mirrors the graphical and lighting changes, suiting itself to the mood of each environment. There's a coherent vision here, but I still feel like the kiddy characters and themes are disconnected from the environmental detail.

There's an obvious reference here to Scott McCloud's Understanding Comics, which describes how a stylised, iconic character design can make it easier to project yourself into the scene, where detailed, photo realistic character design is clearly something other than ourselves. This could explain something about Donkey Kong's appeal, but in my case it isn't working. I've always felt awkward around primates because they're uncomfortably close to human. I already have a sense of "other" which makes it difficult to form a connection.

In the end, this dissonance makes the cartoon jungle less believable than visiting even alien or fantasy worlds. Donkey Kong Country is an interesting place to spend some time, but it strains my imagination too much to stay for long.

You can support Amber by buying Wii Review