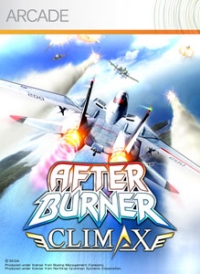 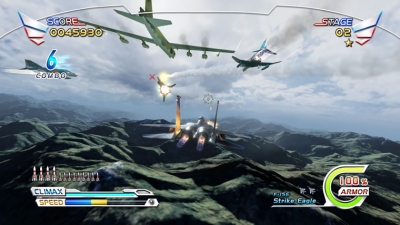 It's been quite a while since I played After Burner. While I can remember feeding 10 pence pieces into an old Sega arcade cabinet, as far as I was concerned, Chase HQ, Outrun and A.P.B was where it was at (A.P.B was an Atari title, similar to the first GTA, but played from the Police's perspective). Still, when this arrived on XBLA I was more than happy to slip on my aviator sunglasses and start calling myself 'Maverick'.

After Burner Climax, to give it its full, innuendo-inducing title, is a frenzied game, with non-stop action right from the go. The nearest comparison I can draw with anything automotive is with my experience driving a Mugen Honda Civic Type R. A car so frantic that a colleague and I called it a PlayStation car because it felt more like something from a videogame than a motor manufacturer. Everything happened in a blur in the Honda and I came out of the car somewhat overwhelmed. The same can be said of my time playing this game.

After Burner includes a selection of planes and paintjobs, from standard military-spec stuff, through to the sort of livery you might see in an aerobatic display team, though in truth I found it hard to tell any discernable difference between aircraft.

It supports flight control joysticks (if you have them) but, since I don't, joypad control is straightforward enough. The game looks good, explosions are suitably fiery and there's a variety of day and night levels, some including some pretty smart Aurora Borealis effects. It's almost a pity your jet speeds over everything so quickly, it's easy to miss some of the details as they whizz by.

Despite its frantic nature, I always (thankfully) felt in control of the Honda, which isn't something I can say of After Burner. In fact, I managed to get two thirds of the way through the game's 12 stages on my first play thanks to a seemingly successful regime of button mashing.

The nearest comparison I can draw is with a Mugen Honda Civic Type R.

Give it a couple of attempts and you'll beat Climax with ease. Titles like Ace Combat show just how far the arcade-style dog fighters have come in the near twenty five years since the first After Burner took to the skies and for me, it's like a Sopwith Camel trying to take on a Eurofighter. One is cutting edge, the other struggles to get off the ground.

OK, perhaps I am being a little too harsh with that last analogy. There is fun to be had with Climax, the EX options go some way to adding a little longevity to the Arcade mode and for those looking to earn true Top Gun status there's Score Attack, but in truth they do relatively little to add to the experience. 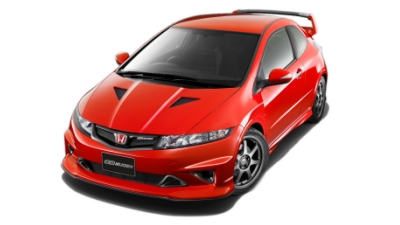 Its biggest mistake is to feel too similar to the old arcade game, which means that it quickly becomes monotonous. Fly along; shoot at what you can, and like Outrun, turn left or right to select the next stage. Then repeat.

Climax remains firmly routed in two dimensions, as well, making it feel somewhat awkward and rather dated. While its contemporary Outrun translated relatively well to the modern era, it's hard for me to feel the same about this. The option to bring in a wingman could have made Climax a lot more fun, but as unfortunately on this mission, you're flying solo.

It's bright, colourful and noisy.

Sega showed with the recent port of Sega Rally Arcade that there's still a place for arcade conversions, but Climax is a tough game to recommend.

If you're looking for a nostalgic, straight forward arcade blaster and have fond memories of the arcade games, then After Burner Climax might be the game for you. It's bright, colourful and noisy; all the things my ten year old self demanded from a ten minute arcade blast, but as a home title, twenty minutes play time may not be quite enough.

You can support Adam by buying After Burner Climax