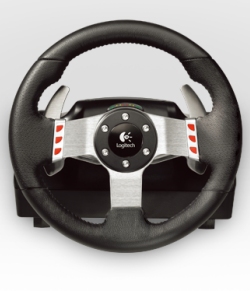 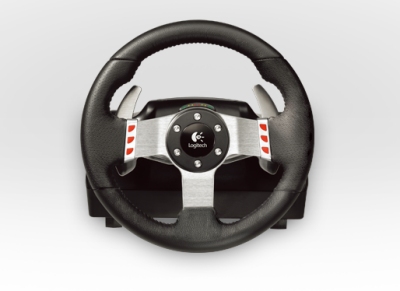 The Logitech G27 Racing wheel has the mechanics and design to mirror real driving. Using it on your lap though destroys all these driving gains.

The same can be argued for home racing wheel set-ups. We've all played arcade games with adjustable seats or even ones that recreate the movements of a car, so sometimes playing a racing game with a pad can feel a little flat.

Steering wheels have been around for years, and have come along way since a ZX Spectrum F1 game tried to convince me I could create my own steering wheel by pressing the lid of biscuit tin into the keyboard. Now with force feedback, three-pedal set ups and even gearshifts, the manufacturers of today's peripherals have gotten pretty close to mimicking the set-up of a car in the home. Except that is for the driving position.

Settling down to play Gran Turismo 5 with the Logitech G27 Racing wheel I'm forced to put it on my lap, arms bent. Now, I know, when you drive in competition you're taught to drive with you arms bent, but this feels all wrong. The wheel is so close to my chest it could be a t-shirt. It doesn't feel car like in any way, shape or form. It's the most unnatural driving position I've been in since I drove a Proton Gen2.

The wheel offers a realistic and impressive feeling of weight.

For those of you not familiar with the Gen2, it's an awful car with a similarly awful driving position. The position of seat and wheel combine to make one of the most uncomfortable and just plain odd driving positions I've ever experienced.

And that's exactly how I feel perched on the edge of my sofa, with the G27 Racing wheel sat on my knees. Thankfully, however the steering wheel of the Gen2 doesn't slide around on my knees when I corner, which is what this Logitech wheel is doing right now. So my next attempt involves a small collapsible table, the sort of thing you might see in an old people's home. Now though the wheel is too high. Or is the sofa too low?

Either way this isn't working. This is a shame, because despite the mess of cables between me, the PS3 and the wall, it actually works pretty well.

There has to be a better way to do this than to stick it on your lap or on a table.

The wheel offers a realistic and impressive feeling of weight, no doubt helped by the fact that the models in GT5 are so accurately recreated in game. I'm actually starting to enjoy myself until the more challenging sections of the circuit and, once again the wheel slides across my lap. Soon enough I'm reaching for my control pad and returning the steering wheel to a dark corner of the living room to gather dust once more.

There has to be a better way to do this than to stick it on your lap or on a table, because as it stands, I've had it with steering wheels, even if they do make driving games that much more involving. They're expensive and a pain to use, especially when you can't get a decent driving position.

I'd love to know what set-up you use and how you bring the racing car into your living room. From this experience though I question whether steering wheels still have a future without some serious rethinking.

You can support Adam by buying G27 Racing Wheel