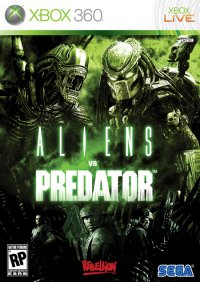 Aliens vs. Predator 360 is a semi-sequel to a comic adaptation of a film, and this identity confusion is evident throughout the game. The terror of playing as the hunted is underused, and the chance to actually play as the monsters is disappointing.

Both the Alien and Predator have suffered for having their mystery removed. If we're scared of what we don't know, then the original Alien movie concocted a great horror conceit: because of the Alien's lifecycle, we don't know what it will look like the next time we see it, and therefore are constantly unsure of what to expect.

Similarly, though less effectively, throughout the original Predator, the monster remains invisible or out of sight, occasionally revealing new weaponry or ways to kill people.

Movie sequels and spin-offs have created a revealed mythology that gives too much of the mystery away. Now we know about Predator tribes, rites of passage and honourable hunting. And the Alien lifecycle has worked it's way into public consciousness, so even people who haven't seen a single Alien movie know that a Facehugger plants an egg in a human, which later bursts out of his or her chest.

Aliens vs. Predator compounds this problem, by allowing players to take control of the Alien and Predator in their own campaigns. If, as I've mentioned, we're scared of what we don't know, then allowing us to actually be these monsters is the very best way of undermining their reputation.

I enjoyed the Predator campaign far more than the Alien, as the Predator has always been more of an action icon. His huge range of awesome weaponry should, in theory, make for a fun action game. Unfortunately, some odd control choices (especially limiting where you can jump) make playing as the Predator extremely restrictive.

Movie sequels and spin-offs have created a revealed mythology that gives too much of the mystery away.

While it was fun to cloak and stealthily hunt Marines the first few times, it quickly became tiresome. It would have been far better if there were some degree of freedom to how I approached each area, but there were only limited places that were accessible, and the gameplay quickly became repetitive.

The first time I had to steal a higher ranking Marine's head to access a restricted area, for example, was engaging and gross. By the fourth time, it had lost it's "charm". Similarly, the Trophy kills, where you tear out your poor victim's spinal column, are kind of fun in a "sick, just like the movie" way. But it grows very old, very fast.

The Alien controls are no better than the Predator's. The creature is so sensitive and fast that I frequently found myself running past my targets, or running in circles around them while I tried desperately to attack.

One time I hung from the ceiling, patiently waiting for my prey to walk underneath me, planning to drop behind him and take him out quietly. I ended up dropping behind him, then running into him, and then being shot by his companion. Other times I would just get lost in the repetitive environments. By the end of the story, I had lost a lot of respect for the Alien.

As I expected, the Marine campaign was far more generic, but also more fun particularly early on. The Pulse Rifle, as made famous in Aliens, is the weapon of choice, along with a few others. The early campaign sees you alone, in a series of buildings remarkably similar to those in Aliens. The lights are out, and every shadow is a threat. The ping of the motion sensor adds just as much tension here as it did in the movie. I encountered very few Aliens early on, but every single one was terrifying. I was finally reminded just how scary these creatures can be.

The game descended into a juvenile empowerment fantasy

Later levels turned the Marines' failed plans on their head. The whole point of the movie was that all their machismo and technology were undone by the Alien, yet here I was happily gunning down dozens, if not hundreds, of the creatures. It felt as though, perhaps, the developers missed the point of the movies, and the game descended into a juvenile empowerment fantasy.

I found the Marine campaign by far the most effective, because it initially made use of the monsters the way they're supposed to be used. In the movies, we empathise with the human victims as they're hunted, not with the monsters. The chance to actually play as the victim, then, works better than playing as the monster, even if it didn't last the entirety of the campaign.

Aliens vs. Predator could have been a better game if it had more focus. A longer Marine campaign, with a more involving story and a concentration on being trapped inside, in the dark with Aliens would have been much more effective.

As it is, while the Alien and Predator are brought to life nicely, the clumsy controls have robbed them of their menace. For now: the upcoming Aliens: Colonial Marines from a different developer could be the videogame salvation of at least one of the franchises.

You can support Tom by buying Aliens vs. Predator